Syria’s new Greek Orthodox patriarch in Damascus called Saturday for Christians to remain in the country. 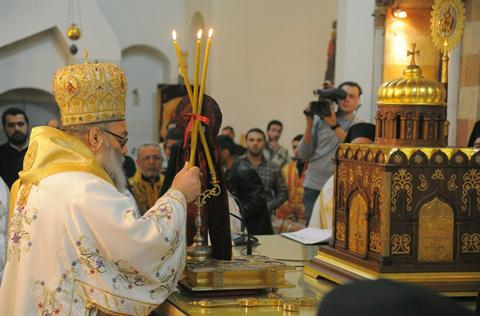 Syria’s Greek Orthodox leader, Patriarch Yuhanna X Yazigi, holds candles as he leads the last Sunday service before Christmas at the Mariamite Cathedral of Damascus, the seat of the Greek Orthodox Church of Antioch, on December 23, 2012.

Patriarch of Antioch and All the East John X Yazigi also appealed to warring parties to renounce violence “in all its forms” and to start a process of dialogue.

In his first news conference since succeeding Ignatius IV Hazim, who died on Dec. 5, he said: “We Christians are here in the country and we will stay here.

The patriarch sought to play down dangers faced by Christians.

“What is happening to us is happening to others too. We are in the same situation as everyone else, Muslims and Christians, shoulder to shoulder, facing the difficulties,” he said.

There are some 1.8 million Christians in Syria. Many have remained neutral in a conflict that erupted in March 2011. Others, fearing a rise of Islamism, have taken Assad’s side.