Legislation bans international adoption by couples from countries where same-sex marriage is legal. 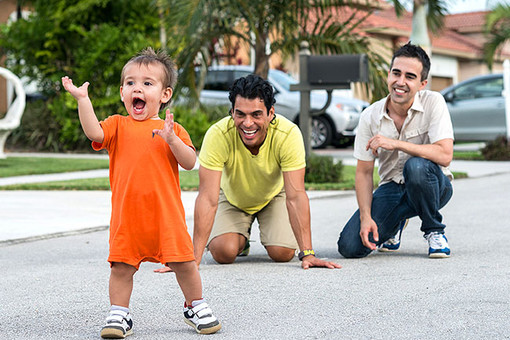 New Russian legislation has extended an existing ban on international adoptions of Russian children by same-sex couples to all citizens of countries that recognize same-sex marriage.  Russia had banned same-sex couples from adopting in June 2013.

In several other countries, one partner in a same-sex couple has the right to adopt the biological child of the other partner. In Germany, for example, under a 2005 law, a gay parent can adopt if the child is a blood relative of one of the adopting parents. However, a gay couple in Germany cannot adopt a child who is not related to either of the two partners.

In the United States, each individual state has the power to decide whether to allow homosexual couples to adopt. In some states there is no official ban, but there is no explicit permission either. However, it is legal in all states for one LGBT parent to adopt.

Russian religious leaders have condemned laws that allow adoption by same-sex couples in some European countries. Vladimir Legoyda, a spokesman for the Russian Orthodox Church, said that in recent years, several European countries have made changes that destroy the traditional family.

“Recent decisions by some countries to give cohabiting same-sex couples the same status as families, including the right to adopt, are the final salvo in a long process of abandoning such ideas as chastity, celibacy, and marital fidelity,” Legoyda said.

Mikhail Fedotov, head of the presidential Council for Human Rights, said that the law banning adoption by same-sex couples in Russia is superfluous, since this was already the case in practice. “Adoption can only by authorized by a court. And when courts make their rulings in such cases, they always abide by the Russian Family Code, which stipulates that marriage is an equal union between a man and a woman.”

The limited studies that have been done on children who grow up in same-sex families are inconclusive. Some researchers have found that children brought up by homosexual couples are not any more likely to develop emotional problems than to those who grew up in traditional families.

Others have found that adolescents brought up by same-sex couples have a greater chance of developing suicidal thoughts and depression. However, research has clearly shown that children raised in orphanages have serious difficulties adjusting to adult life.

Olga Sinyaeva, who has made a film about orphans, said that while she believes that traditional families are best for children, adoption by loving parents of any sexual orientation is better than remaining institutionalized.

“[Children in orphanages] live in constant deprivation, and they especially lack emotional contact,” Sinyaeva said. “This is so hugely important to them that even if, for example, a same-sex family or an unmarried couple gives them a gift of such contact, the child becomes completely revitalized.”