Nikon Zhila: Trips like this help us strengthen our spiritual communion

From the Editors: Nikon Zhila is the director of the Sretensky Men’s Monastery Choir. From October 8-23, 2012 the Choir will be in the USA for the first time since their sensational world tour of 2007, when they participated in celebrations of the restoration of canonical unity within the Russian Orthodox Church. Nikon Zhila was interviewed by the Editors of the official website of the Russian Church Abroad which we publish below.

-Please tell us about yourself, your parents, and how you came to church singing, to working at Sretensky Monastery. 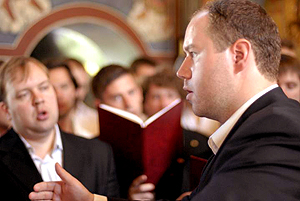 I grew up in the family of a priest and so since my childhood, I was accustomed to attending church. When I was very little, my father taught at Moscow Theological Seminary, and my mother sang in Holy Trinity-St Sergius Lavra under the direction of Archimandrite Matfei (Mormyl). Obviously, I was proud that I was allowed in the kliros with my mother and hear the choir sing. My friends, who were just like me, from the families of priests, loved the night-time services on Christmas and Pascha! What exhilaration we felt when they let us ascend the altar stairs to the cupolas of Uspensky Cathedral! The sounds of the choral singing reached the vaulted ceilings of the cathedral and rose further up into the sky. At the time, we didn’t quite understand what was happening during divine services, but the profound beauty and the sense that something utterly special was happening stayed with us… Later, in school, at the request of my father, I was given blessing to join the choir of the Moscow Theological Academy, which as even today was directed by Hegumen Nikifor (Kirzin). There I began studying church singing.

At the same time, of course, we were persecuted in school as “church people” and “obscurantists,” but I think this helped us determine our position with regard to church and life.

Fr Matfei allowed me to join the choir of the Lavra, and it was with them that I got to my first service in Uspensky Cathedral in the Moscow Kremlin. I could not have imagined then that I would later sing divine services as a member of Sretensky Choir in this ancient cathedral.
During my studies at the Institute, I sang in various Moscow churches. In 2001, my friends, who sang in Sretensky Choir, suggested that I audition for its director at the time, Hegumen Amvrosy (Yermakov). In 2005, Fr Amvrosy was consecrated to the episcopacy, and I was offered the position of director of this remarkable ensemble.

-What comprises the repertory of Sretensky Choir? 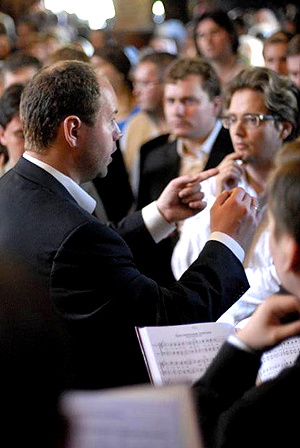 In Russia today we are seeing a renascence and reestablishment of church singing. A great deal of spiritual music by eminent Russian conductors such as Sveshnikov, Minin, Fr Matfei (Mormyl) and others has been reintroduced to the Russian people.
The style of church singing created in Holy Trinity-St Sergius Lavra by Fr Matfei has greatly influenced many other church choirs, including our own. This tradition was adhered to by Fr Amvrosy, and we try to follow his example.

Today our group knows over 200 works, including church music, which we sing in the style of the Russian male monasteries, and this comprises the foundation of our repertoire. This includes Chesnokov, Grechaninov, Rachmaninoff, Tchaikovsky, Rimsky-Korsakov, Kastalsky and others. But we also consider it important and necessary to continue and preserve the Russian singing tradition. There is an enormous reservoir of Russian culture, which must be preserved for our descendants. So an important part of our concert programming is devoted to Russian folk songs, military songs, and some compositions by Soviet composers, including romances arranged for a male choir. At the same time, the process of putting together a concert program gives us the opportunity to demonstrate the bond between Russian church and folk musical cultures. The Russian folk song and Russian spiritual melody are related, and closely intertwined. Our concert repertories, intended for the broadest audiences, are multifaceted: there is spiritual and folk music, and music that contains both traditions. But every piece of music, bar none, is educationally interesting, artistically compelling and musically expressive. Most of all, they are deeply religious, patriotic and bear only positive, proper emotions and concepts of faith, of honor and friendship.

– What is daily life like for the choir members?

Our main activity is singing in church during divine services. The Sretensky Male Choir is the Festive right-kliros choir, and we sing at least twice a week; this includes all-night vigil on Saturday and Divine Liturgy on Sunday morning. The choir sings at the monastery’s feast-day services, the Twelve Great Feasts and other holidays, and at particularly important Patriarchal services at Christ the Savior Cathedral and Uspensky Cathedral in Moscow’s Kremlin. The choir often participates in the consecrations of new churches. The singers of Sretensky Monastery are often sent on trips throughout the country and abroad, accompanying delegations of the Moscow Patriarchate.

In addition to their main work in church, we hold many concerts and record albums.
For rehearsals we gather in the auditoriums of Sretensky Theological Seminary. These occur before divine services, and on other days, once or twice a week. These are regular choir rehearsals.

– What do you remember from the last trip of Sretensky Choir to the US, when your singers accompanied the “Reigning” Icon of the Mother of God? What are the goals of such trips? 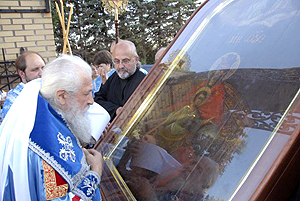 Oh, what memorable impressions! Indeed, in 2007, we had the honor of visiting the US as part of the celebrations of the signing of the Act of Canonical Communion between the two branches of the Russian Orthodox Church, and the “Reigning” Icon was with us. So many Russian and American parishioners came to venerate the icon! Of course, it was a great joy for us to participate in such an historic event! We participated in divine services in many churches of America, Canada, Australia and Europe. Our concerts were almost always filled with grateful audiences, and we were always so warmly greeted! This demonstrates that our compatriots abroad have not forgotten their care for Russia’s history and their historic roots. Without a doubt, trips like this help us strengthen our spiritual communion. Even despite the fact that we found ourselves on different countries, we know that the Church is one, and the people are one!

-What would you like to say to those who will participate in the forthcoming divine services and concerts in the USA?

God’s help, success and many years!

­-What are your plans for the immediate future?

Our choir has many interesting projects on tap. All sorts of proposals are coming in, a lot of important concerts. From the US we will head to China, where we will participate in the Beijing Festival of Classical Music. Then, immediately upon our return to Moscow, we leave for Ekaterinburg for a series of concerts. Then we have concerts scheduled in Moscow and other Russian cities.