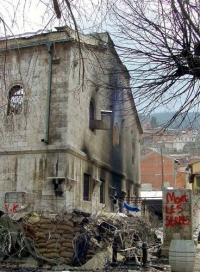 A view of a Serbian Orthodox church after the attack

BELGRADE — The Serbian government and the Serbian Orthodox Church (SPC) are today marking the ninth anniversary of pogrom in Kosovo.

During the rampage, Albanian extremists and terrorists killed ten and expelled more than 4,000 Serbs, destroyed and burned 938 Serb houses and apartments and 35 Orthodox churches and monasteries in just three days.

A manifestation dedicated to the suffering of the Serb people will be held at the National Theatre in Belgrade and attended by the country’s top officials, church dignitaries, prominent public figures and foreign diplomats.

The government’s Office for Kosovo will mark the anniversary under the slogan “Crime without Punishment.”

Bishop of Raška and Prizren Teodosije will serve a commemoration at the St Nicholas Church in Priština. Office for Kosovo Director Aleksandar Vulin will be present at the commemoration.

Northern part of Kosovska Mitrovica will also see a commemorative ceremony for the Serb victims and an exhibition of photos that testify to the March pogrom against the Serb population.

The SPC will mark the anniversary with an exhibition dubbed “Not to be forgotten,” which will present copies of frescoes of the Serbian Nemanjić dynasty.

The pogrom against Serbs took place on March 17-19, 2004. The key actors and organizers from Albanian political structures and their paramilitary formation, so-called Kosovo Liberation Army (KLA) have never stood trial for this outburst of violence.

The expelled Serbs have not returned to their homes and those internally displaced in Kosovo still live in collective centers, container settlements or other people’s homes.

For nine years, Serbia has been repeatedly warning the international community about the vulnerability of the Serb population and a permanent campaign of intimidation carried out by Kosovo Albanians.

In his last address to the Security Council, Serbian Prime Minister Ivica Dačić cautioned that the incidents covered by the report of UN secretary general were a part of an orchestrated campaign whose aim was to conduct a total ethnic cleansing of Serbs and destroy their cultural heritage.

Most viewed articles
How Can We Evangelize Today?201
Five Signs of a Modern Pharisee189
Trial of Politician Defending Traditional Marriage Begins in Finland100
Medical Workers Walk 1.5 Km Through Snowdrifts and Save the Life of a 100-Year-Old Woman97
Grains of Wisdom and Piety Book Published66
Hierarchs of Three Local Orthodox Churches Concelebrate in Argentina66
Bad Habits And Their Cure64
Patriarch Daniel prays for Romania’s national unity, peaceful coexistence and dignified cooperation with other peoples51
ROC Holy Synod Discusses the Announcement of the Patriarchate of Alexandria Concerning the Establishment of the ROC Patriarchal Exarchate of Africa36
150th anniversary of the establishment of the North American diocesan see in San Francisco30
Most popular authors
Pravmir.com team395
Frederica Matthewes-Green201
Archimandrite Markell (Pavuk)189
Saint Nicodemus the Hagiorite64
Aurelian Iftimiu51