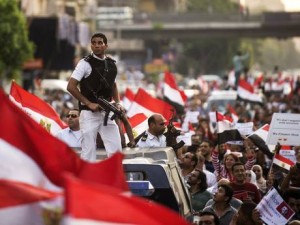 Father Mina Cheroubim had just left his church to go to the market when he was ambushed by masked gunmen. They opened fire, cutting him down in the street; he was already dead by the time he was taken to hospital.

The Coptic Orthodox priest was well-known and liked in El Arish, a small town in northern Sinai. The local Christians and Muslims say they are convinced that the killers were outsiders who had gone in to create division and spread terror in the community.

There have been reports of a series of sectarian attacks in recent days; many Christians believe they have become targets as Egypt has seen an unleashing of rage following the deposition and detention of President Mohamed Morsi by the army.

The Muslim Brotherhood has accused the Coptic hierarchy of being part of a conspiracy to remove their man from power. One of the movement’s leaders lashed out at Pope Tawadros II at a rally, accusing him of violating his predecessors’ policy of non-interference in politics. The head of the church had blessed the move against Mr Morsi and was in attendance when General Abdel Fatah al-Sisi, the army chief, announced the suspension of the constitution.

The speech by Mohammed Badie, one of the few senior figures of the Brotherhood not to be arrested, was followed by Islamist demonstrators, on the streets for a “day of rage”, trying to storm Tahrir Square, where their opponents had gathered for days. One man died in the street battles which followed, adding to the 36 others killed across the country.

Father Cheroubim’s death on Saturday was followed by an attack by a Muslim crowd on Christians in the village of Nag Hassan in Luxor province, in which four people were killed and three others injured, with 16 homes and shops set on fire.

On the day Mr Morsi was officially removed from office, St George’s Coptic church at Delga, in Minya province about 150 miles south of Cairo, was looted and burnt and el-Saleh church came under fire, with two people injured. The majority of the Christians among the population of 65,000 in the area have fled and say they are too afraid to go back home.

The Nag Hassan killings were said to be in retaliation for the death of a 45-year-old Muslim man whose body was found near a river. Local Copts, however, claim that they had been “framed” by Salafists in the area with the connivance of the authorities.

After hundreds were besieged by a Muslim mob at Cairo’s St Mark’s Cathedral following the funeral of four Copts who had been shot dead, Pope Tawadros charged Mr Morsi with reneging on his promise to protect the country’s Christians. Members of the security forces had failed to intervene and some had even joined in the assault lasting hours.

The pastor of the Catholic church in Delga maintained that the supporters of President Morsi had stepped up a campaign against Christians in the area. Gangs had entered at gunpoint and stripped homes of everything from jewellery to furniture. The Reverend Ayub Saleh said: “I called the police many times, saying they must help, but they never came. They don’t help; this type of harassment has been going on for a long time, going on when Morsi was president.”

The security forces turned up the following morning. One Christian resident complained: “They looted every Coptic home and spared the Muslim homes. Most of the Copts are now outside the village, they don’t know whether their homes are still there, or burnt.”

Churches have begun to take precautions, augmenting security, sending evening congregations home earlier. At the church of St George in Cairo, Father Makari, however, was extremely wary of saying anything which could provoke anger from supporters of the Brotherhood.

“We have faith in God; we believe God will not allow too much harm to take place. The Copts are part of the Egyptian fabric: we should not be seen as different. We have very good relations with our Muslim neighbours here: we give them water after their prayers; they give us water after ours.”

The army had no choice but to intervene and remove Mr Morsi from the presidency, Father Makari held. “They were not doing it for themselves, they were going along with the wishes of the people. Morsi had become very unpopular; his policies were not working; people wanted change.” Mohamed El-Baradei, the former head of the International Atomic Energy, mooted as an interim prime minister, has the “right qualifications” for the job, he felt.

But Susan Dessouki is keen to join the thousands of young Christians leaving the country, whoever emerges as the new leader. Egyptian nationals form the second largest group to be granted political asylum in the US, and the Dutch government had made the asylum process for Christians easier following reports of persecution.

“I don’t think the Muslim Brotherhood will go away, I think some of them might become even more extreme because they will think there is no room for them in politics. We also hear about new terrorist groups forming. I read there was a new one in Sinai,” said the 27-year-old pharmacist.

“There are things going on which people in Europe and America don’t even know about, like young Christian girls who are being kidnapped by Salafists. My parents say they are too old to leave. I have got a brother and a sister in Canada and I want to join them; there is no future for Christians in Egypt unfortunately.”