Number of Orthodox Church Members Shrinking in Russia, Islam on the Rise – Poll 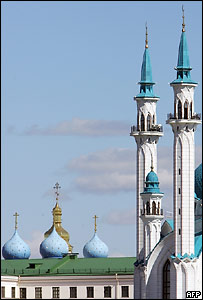 Moscow, December 17, Interfax – Orthodoxy is the most common religion in Russia. 74% call themselves Orthodox believers, while 7% say they are Muslims. Less than 1% profess other religions (Catholics, Protestants, Jews and others), the Levada-Center analytical center told Interfax on Monday.

The number of people who do not designate themselves as either religion is up from 8% to 10%. The number of atheists is down from 6% to 5%.

76% of Russians who describe themselves as Orthodox believers are church-goers. 33% of them go to church to light a candle and pray; 29% attend baptisms, church weddings or burial services, and 11% attend church services or liturgies.

29% go to church whenever they wish, 8% have been to a cathedral on an excursion, and 7% go to church to make a confession and take communion.

61% of the respondents said they had never opened the Bible. Of those who did, 24% read the Gospel, 16% read the Old Testament and 11% read the New Testament.