The bird knows his vulnerability; we humans try our best to imagine we are immortal. When humans list their “problems,” they usually don’t mention the most obvious one that will make all the others irrelevant: soon we won’t be alive. The shadow of death darkens the whole earth. Everything about us is wearing out and fading away, whether it be our cars, our houses, our knees, or our memories. Yes, there will be other birds and other people, as long as God wills, but they won’t be us.
Archpriest Paul Yerger | 24 April 2009

Recently I saw a mockingbird outside my window at work just a few feet away, hopping about on the pavement, pecking up bugs at the base of a tree. It was a joy to watch him, yet I noticed that his bright eyes darted about constantly; his body was ready to fly away the instant any danger was sensed. I thought it sad that this handsome bird, among the largest in this area, one that will fearlessly tease a cat by flying about its head, must always be watching for danger. What a way to have to live! Yet the bird knows that life is good: the sunshine is sweet, the bugs are tasty; it’s always good to be alive. Indeed any creature that is alive is more marvelous than anything humans can make.

Nevertheless every creature now lives in fear for its life. In a few years the mockingbird will be dead; in a few more so will I, and everyone I know. The bird knows his vulnerability; we humans try our best to imagine we are immortal. When humans list their “problems,” they usually don’t mention the most obvious one that will make all the others irrelevant: soon we won’t be alive. The shadow of death darkens the whole earth. Everything about us is wearing out and fading away, whether it be our cars, our houses, our knees, or our memories. Yes, there will be other birds and other people, as long as God wills, but they won’t be us. People prefer not to think of this all. When they do they may rationalize or philosophize that death is somehow good. This is not scriptural:

For God made not death: neither hath he pleasure in the destruction of the living. For he created all things, that they might have their being. . . For God created man to be immortal, and made him to be an image of his own eternity. Nevertheless through envy of the devil came death into the world: and they that do hold of his side do find it. (Wisdom 1:13-14, 2:23-24)

Much of what Christians today are prone to say at funerals about “heaven” and “immortality” is not scriptural and may also be a form of denial. That may the subject of another article; for now I will say that the comfort offered to Christians concerning death in the New Testament is usually the promise of Resurrection on “That Day,” the Second Coming of the Lord (e.g. 2 Tim. 1:18, 4:8, 1 Thes. 4:13ff, St. John 6:54). 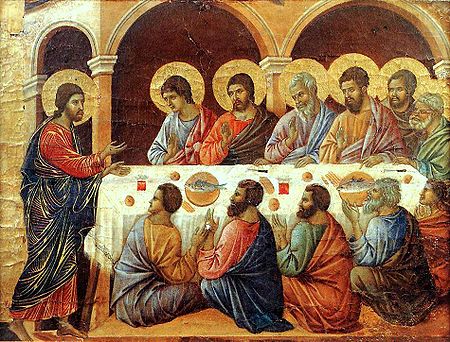 Many have observed that while Christians may speak of heaven as “a better place,” few seem to want to go there any sooner than they have to. This is good; intuitively they recognize that their life here, in this body, in their own country and house, among their friends and kin, is the life that God gave them and the life that they love. More important, this life here in the body is the life in which they must struggle and in Christ overcome evil; this life is the one they must make holy by union with the Holy Spirit.

Death is the result, the “wages” of sin (Rom. 6:23), but is also in a sense a cause of sin. Because our life is endangered and passing away, our resources are limited, our time is short, we think we had better look out for ourselves, keep others at bay, blame them for our problems (cf Gen. 3). The following describes many in our culture:

For the ungodly said, reasoning with themselves, but not aright, Our life is short and tedious, and in the death of a man there is no remedy: neither was there any man known to have returned from the grave… Come on therefore, let us enjoy the good things that are present: and let us speedily use the creatures like as in youth.

Let us fill ourselves with costly wine and ointments: and let no flower of the spring pass by us: Let us crown ourselves with rosebuds, before they be withered…Let none of us go without his part of our voluptuousness … Let us oppress the poor righteous man, let us not spare the widow, nor reverence the ancient gray hairs of the aged. Let our strength be the law of justice: for that which is feeble is found to be nothing worth. (Wisdom 2:1, 6ff)

In this mindset, death is seen as good: Ungodly men with their works and words called [death] to them. . . they thought to have it their friend … and made a covenant with it (Wisdom 1:16) Today we have a “culture of death.” It solves many problems, such as unwanted children and old folks who have become a burden. Ironically we describe it as  a “blessing” when it puts an end to suffering and what seems to be a hopeless situation. But suffering is the work of death in the first place; it is an earlier stage of  the same enemy. Death is at work in us from birth, hastening us to destruction. No matter what his age or condition, for a human being, created in the image of God, to cease to live should always be seen as incomprehensible, an outrage, an insult and a tragedy. This is well expressed in the hymns of St. John of Damascus, sung at every Orthodox funeral:

I weep and I wail when I think upon death, and behold our beauty, fashioned after the image of God, lying in the tomb disfigured, dishonoured, bereft of form. O marvel! What is this mystery which doth befall us? Why have we been given over unto corruption, and why have we been wedded unto death?

If we see the reality and evil of death, we can see what Good News is the Resurrection, that Christ took our flesh and blood that through death he might destroy him that had the power of death, that is, the devil;  And deliver them who through fear of death were all their lifetime subject to bondage. (Heb. 2:14-15)

When the disciples encounter the risen Lord they have an experience already of the age to come, when God shall wipe away all tears from their eyes; and there shall be no more death, neither sorrow, nor crying, neither shall there be any more pain: for the former things are passed away. (Rev. 21:4 )

A keynote of the Resurrectional proclamation is victory. It is not that Christ avoids or escapes death, but engages it, by obedience and love stripping it of its power: I am he that liveth, and was dead; and, behold, I am alive for evermore, Amen; and have the keys of hell and of death. (Rev. 1:18)

Likewise the promise to us is not that we will escape death, or that it is only an illusion anyway, but that by our union with Christ we will share His victory over it, and our bodies – our whole selves – victorious and transcendent and glorified, will live again.

Know ye not, that so many of us as were baptized into Jesus Christ were baptized into his death? Therefore we are buried with him by baptism into death: that like as Christ was raised up from the dead by the glory of the Father, even so we also should walk in newness of life. For if we have been planted together in the likeness of his death, we shall be also in the likeness of his resurrection. (Rom. 6: 3-5)

In the services of Holy Week and Pascha, we have the same experience as the Apostles. After confessing our sins and living through our Lord’s trial and crucifixion, after kneeling at the Lord’s Tomb, after renewing our Baptism as we see that of new Church members, we will stand in the darkness before the Church doors and sing

Christ is risen from the dead, trampling down death by death, and upon those in the tombs bestowing life!

We too will have a foretaste and promise of that Kingdom when “life reigns,” when “not one dead remains in the tomb.” Come and see!