On detention and beating of Orthodox Christians by Kosovo police 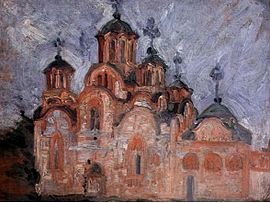 Information service of the Serbian Orthodox diocese of Raška-Prizren reports that during Christmas celebration on 7 January 2013 the police of the self-proclaimed Republic of Kosovo executed a raid operation in the Gračanica convent. The ruling hierarch, Bishop Teodosije of Raška-Prizren, was not notified.

The worshippers’ confusion, fear, and bewilderment over actions of the police were redoubled by the detention of Orthodox Christians who were in Gračanica to attend Christmas divine service. Several Serbs were detained and brought to Priština for interrogation without any indictment. According to one of them, they were beaten while in the detention unit. He sustained serious injuries and was admitted to the local hospital. Whichever aim the police pursued in the raid, its pertinence during celebration of the great Christian feast within the walls of the ancient monastery, an important spiritual and cultural centre in Kosovo and Metohija, raises doubts.

The detention of Orthodox Christians on the day of the Nativity of Christ and brutal and inhuman treatment of the detainees evokes indignation, the more so because the police have not seen it fit to announce the detainees’s guilt.

In view of all this, perplexity is evoked over inaction of the Kosovo police in Djakovica, where aggressively minded participants of the Albanian Self-Determination movement blockaded the road to the monastery of the Assumption of the Holy Virgin, thus keeping worshippers from the divine service.

While expressing our solidarity with our Orthodox brothers harshly persecuted during celebration of the great feast of the Nativity of Christ, we believe that apologies for inappropriate actions of the police must be offered to Bishop Teodosije of Raška-Prizren and to mother superior of the Gračanica convent and the mass media must present exhaustive explanation of the incident.

Both incidents have once again vividly shown that the authorities of the non-recognized republic defy religious traditions of the Serbian minority and are not willing to respect and defend the rights of the Orthodox residing in Kosovo and Metohija.