On Standing in Church

Did you know that all Orthodox Christians, east and west, always stood until the 16th century Protestant Reformation? Protestantism replaced the altar as the focus of sacramental life, with the pulpit as a focus of intellectual life. The Church was transformed into a classroom, a lecture hall, with benches and lecterns. This radical change in architecture manifested a deeper shift in Western Christianity's idea of God and how we worship Him.
| 04 September 2009

One of the first things that surprises a newcomer to a traditional Orthodox Church is the absence of pews or rows of chairs. The nave seems so empty. What do people do? They stand! How odd!

Did you know that all Orthodox Christians, east and west, always stood until the 16th century Protestant Reformation? Protestantism replaced the altar as the focus of sacramental life, with the pulpit as a focus of intellectual life. Instead of the offering of bread and wine, there was the offering of a lecture, a sermon. The congregation listens and, for the first time in history of Christianity, they sat down. The Church was transformed into a classroom, a lecture hall, with benches and lecterns. This radical change in architecture manifested a deeper shift in Western Christianity’s idea of God and how we worship Him.

In Orthodox terms, worship has always been a liturgical invocation of personal, Trinitarian presence. In Christ through the Holy Spirit we enter the life of the Trinity. God is accessible to the whole man, body, mind and spirit. On the other hand Western worship has become an academic and intellectual discussion, largely dependent on a moral exhortation. In this situation worship becomes an affair of the mind or the intellect. This is not worship because it deals only with the mind. 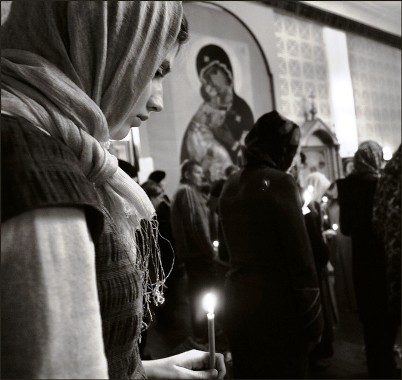 Western churches that do have liturgy followed the general Protestant example of having pews. In these cases liturgy became not only an intellectual activity of the mind but also a spectator activity of the church goer. Active participation in worship becomes impossible as people become confined to rigid and limited space. Liturgy with all its rites becomes about God and is no longer of God. When this happens Liturgy, according a prominent Western Roman Catholic Liturgical theologian, “shifts toward being some form of education done in a doxological context for ideological ends, then significant mutations begin to occur. Concepts become more precise, the assembly more passive, ministries more learned, sermons more erudite, and pews fixed.” (On Liturgical Theology, by Aidan Kavanagh)

Orthodox Liturgy is called divine because it is of God and not about Him. It is the experience of God with us, giving Himself to us through word, hymn, action, rite, etc. All of which are of God because they are inspired by the Holy Spirit. In order for us to participate in this divine action, Orthodox do not merely stand in church.. There is a continuing dynamism, and movement on the part of the congregation. This is often quite distracting to westerners because liturgy or going to church for them has become an educative process that excludes movement. In Orthodox divine services the believer, the total person, worships using all their senses. In other words the total person is involved not only their mind. Orthodox worship is natural, spontaneous, and genuine. There is movement about the temple before and during the Liturgy. People do deep bows and prostrations. At certain points the entire congregation moves forward. during a censing of the temple the people move to the center of the church. During the entrances the priest moves among the people. There is no rigidity here, no confinement, no sterility, only the freedom to involve our whole person in worship. Of course all this can become an idol and done for the incorrect reasons.

Here in America, Orthodox Christians had an inferiority complex and had to imitate and fit in with their Protestant and Roman neighbors. We appeared foreign and tried to imitate their worship patterns. As a result pews became fixed, organs, choir robes etc. appeared on the Orthodox scene. There are definite reasons why they did not exist in Orthodox Worship, just as they did not exist in Biblical worship of the Old Testament. Biblical worship, Old and New Testament of God and not about Him. It is God given.

The real issue is not sitting and standing. Orthodox Churches always provided places for the elderly, the sick, the infirm and pregnant and nursing mothers a place to sit. At times the congregation is directed to sit outside of non- Eucharistic services for psalmody, scripture readings, and for the sermon. For the reading of the Gospel one always stands. For the healthy standing was always the norm.

Standing is the norm because Orthodox Worship is liturgy. Liturgy means a common work of a group of people gathered together for a common purpose. One when one is involved in a specific work, or even a game such as baseball or basketball, it is impossible to be involved to work at the game and be sitting or even confined to a certain area. One needs the freedom to move around. In worship, if it is really liturgical and done liturgically, one needs this freedom to work or to liturgize. It is hard work and sitting in rigidly fixed pew that confine and do not permit one to work at Liturgy. Our common goal involves work and in this work we ascend to the Father in Christ through the power of the Spirit. Our Liturgy is literally heaven on earth. Christ is truly in our midst and where He is there is His Father. This is not an endeavor of relaxation.

This is true of all Orthodox worship, not only the Eucharistic Liturgy. All Liturgy is work. It is God’s work done in His Church.. We enter into His presence and when we are there we stand in awe and respect of His presence in our midst.