On the Calling of the First Apostles in Luke 5:1-11

1  And it came to pass, that, as the people pressed upon him to hear the word of God, he stood by the lake of Gennesaret,
2 And saw two ships standing by the lake: but the fishermen were gone out of them, and were washing their nets.
3 And he entered into one of the ships, which was Simon’s, and prayed him that he would thrust out a little from the land. And he sat down, and taught the people out of the ship.
4 Now when he had left speaking, he said unto Simon, Launch out into the deep, and let down your nets for a draught.
5 And Simon answering said unto him, Master, we have toiled all the night, and have taken nothing: nevertheless at thy word I will let down the net.
6 And when they had this done, they inclosed a great multitude of fishes: and their net brake.
7 And they beckoned unto their partners, which were in the other ship, that they should come and help them. And they came, and filled both the ships, so that they began to sink.
8 When Simon Peter saw it, he fell down at Jesus’ knees, saying, Depart from me; for I am a sinful man, O Lord.
9 For he was astonished, and all that were with him, at the draught of the fishes which they had taken:
10And so was also James, and John, the sons of Zebedee, which were partners with Simon. And Jesus said unto Simon, Fear not; from henceforth thou shalt catch men.
11 And when they had brought their ships to land, they forsook all, and followed him. 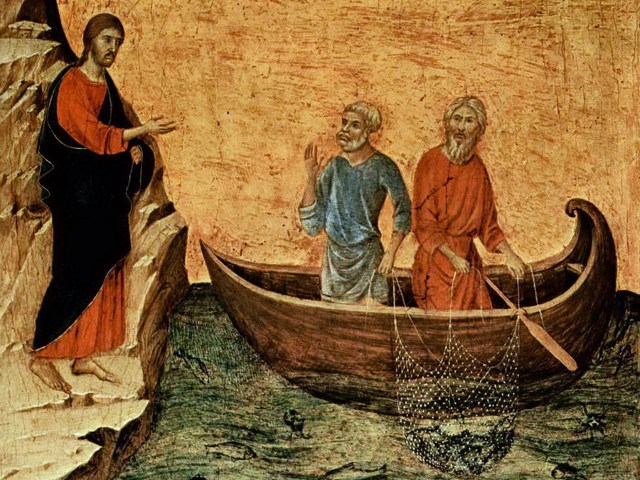 To be called.  To be called to serve, perhaps as a priest.  I have often ruminated.  How are we called?  How do we serve?  Am I called to be a priest as many have asked?  Am I holding a part of myself back by not responding to this call? I asked Fr. Antony  (Fr. Antony Hughes, pastor of St. Mary Orthodox Church, Cambridge, MA) this question yesterday, and he replied by saying that I can’t plan for this, but I simply need to “be ready” and to “make myself ready”.

In this Gospel, Jesus had just announced himself to his people in Nazareth, but they responded by running him out of town.  After reading Isaiah to the congregation, Jesus says “no prophet is recognized in his own country.” I sometimes think about that Gospel when Fr. Antony is speaking to us about the interior life.  Are we really listening to him?  Or is his call wasted?  Jesus says, “There were many widows in Elijah’s time, and the famine lay hard on the country, but Elijah was sent to none of these widows.  And there were many lepers in Israel, but not one of them was healed, but only Naaman the Syrian.”  This aroused the congregation to a fury.  You see, Jesus doesn’t just heal everyone, but only a few, and often just to demonstrate his power, and his love at that moment.

By contrast, Jesus is received with welcome in Capernaum on the Galilee, a lakeside town.  Here the crowds press around him, so that he has to get into a boat in order to be heard.  And as he was speaking the word of God, the fishermen were washing their nets.  I love that image:  Here is the voice of God beside them, and there are these men, repairing their nets – half listening.  Again, is this a picture of us – a congregation of distracted half-listeners?  After speaking, Jesus asks Simon to put out into the deep water.  This is a first sign of Peter’s calling.  If we are going to respond to the call, we need to be willing to go out into deep water, into the unknown.  I like Karen Armstrong’s insight that Post Modernism (that is the world in which we live) is corrosive toward all certainty and this is a good thing, because God is found in the unknown.  When the Lord says to Moses “I am that I am”, he means “Never mind who I am.”   – The nature of God is beyond discussion.  Rest in that.  No more questions.  The definite God of modernity and its complement, atheism are 20th century developments.  But being too certain of what we know breeds genocide.  (pause) The most common response to questions about God is what? – Silence – because God is beyond words.  He eludes measurement and conception.

Jesus then commands Simon to let down his nets for a catch. Simon (almost whining) replies “I’m tired; we were hard at work all night.  We caught nothing.”  The men by the Sea had toiled all night.  They were tired and discouraged.  But then Simon says, “I will do as you say”.  Because when Jesus spoke, his words gave them the encouragement to try one more time.  And their huge catch of course loads two boats to the point of sinking.

At this moment Peter feels he cannot bear Jesus’ presence.  “Go Lord, leave me. I am a sinful man.”  You know these men had not passed the most elementary catechism.  When Peter is called to leave his boat behind, he has no idea of what is to come.  They could not know the end toward which Jesus’ life was moving.  But Jesus made them his friend, and the one thing they wanted was not to disappoint him, even though they did.  Jesus still loved them, and that was their salvation, and ours: that is the love of Jesus Christ.  All they knew was that when they looked at Jesus, they wanted to be with him more than they wanted anything else.  “As soon as they brought their boats to land, they left everything and followed him”.

So Peter, James and John responded when Jesus called them and they went to be with him from that day on.  The essential matter was simply that they said “yes” when Jesus said “Come with me”.  When I am confused, I remind myself to simply be with Jesus.  I would love to hear his voice saying, “Today you will be with me in paradise”.   What can be more hopeful than to hear these words spoken to us (who are thieves) that we have an eternal destiny with this man who embodies love?  To be a disciple of our Lord does not depend on what you know, or how orthodox you are.  It depends simply on the impulse that wants to follow Jesus Christ.  When we obey that impulse, the rest will come.  Thanks be to God. 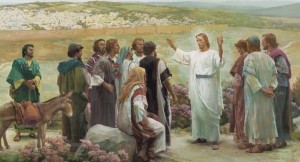 Of Vocation, Callings and Such
Priest Milovan Katanic

In his homily about how our Lord amazed His future disciples, the fishermen, with a great…