On the Church and Eternity

“The Church is without beginning, without end, and eternal, just as its founder, the Trinitarian God, is without beginning, without end, and eternal. The Church is uncreated, just as God is uncreated. It existed before the ages, before the angels, before the creation of the world…” Thus began the article, “On the Church,” by Archimandrite Porphirios the Kapsokalivite (Bairaktaris + 1991), one of the most authoritative Greek spiritual fathers, in our last issue. We asked Bishop Atanasije, a well-known theologian of the Serbian Church, to give a theological commentary on this assertion. 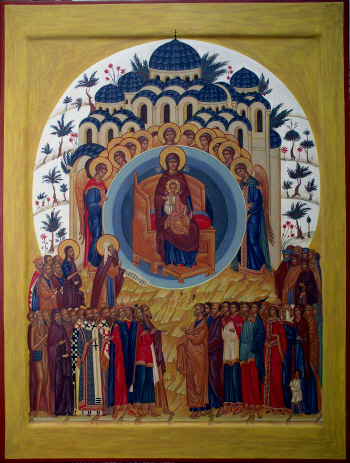 All Creation Rejoices in Thee

That the Church is eternal and that its being will never end requires no demonstration. The Apostle Paul, in the Epistle to the Hebrews, tells us: But ye are come unto mount Sion, and unto the city of the living God, the heavenly Jerusalem, and to an innumerable company of angels, To the general assembly and church of the firstborn, which are written in heaven, and to God the Judge of all, and to the spirits of just men made perfect, And to Jesus the mediator of the new covenant, and to the blood of sprinkling, that speaketh better things than that of Abel (Heb 12:22-24). This is our homeland (cf., Heb 11:14) and our city, the founder of which is Christ (cf., I Cor 3:11; Eph 2:20, Heb 11:10).

But we can also speak of the eternity of the Church from the beginning. The Holy Trinity is the prototype of the Church. Saint Photius, in one of his sermons, said the Holy Trinity was “en-churched” (ekklisiasasa) and created the world, that is, gathered in Council and was manifest as the Church. The Church, as a design of Divine oikonomia [dispensation], is without beginning. St Gregory of Nyssa spoke about this: “kosmou ktisis ekklisias kataskeui” “the creation of the world is already the foundation of the Church” (cf., Heb 4:3). At the Pre-eternal Council God decreed to create the world, and decreed the Incarnation would be accomplished for the intimate union between God and His creation. This unity arises in the Son of God; and, loving His Son, God loves us. One may say that the entire history of the world is the history of the Church.

Christ is the Church. The holy Apostle Paul identifies the Mystery of Christ with the Mystery of the Church in his Epistles (cf., I Cor 10: 16-17, 12:12, Col 1:18-27). Our Lord is not only the Head, but also the Beginning (ap’ arkhi), its first and best Part, the first member of His Church, in Whom everyone else is co-corporeal. Therefore St Maximus the Confessor identifies the Church with God in his Mystagogia. We can make such an identification in Christ. The Church is the Body of Christ. One must understand it as the Body in the sense that all creation participates in Christ; rational creation, such as man and angels, participate, and participate freely. Christ will be, as St Gregory Palamas says, a myriad of hypostases (murioupostatos), because our hypostases will be united with Him. Our identification with Christ will by no means deprive us of our individuality; on the contrary, it will only affirm us, make us real. The Apostle Paul, who said yet not I, but Christ liveth in me (Gal 2:20), was a very distinct person. And each of us is to become Christ. As an event (gegonos), as a reality, as the Church – all this is repeated (and perfected) in us. Therefore the Church is conceived from eternity and already “pre-incarnate” in Christ. Moses saw on Mount Sinai the image by which he made the tabernacle (cf., Heb 8:5). This image was the Church, and the tabernacle was made according to the image of the Church. This eschatological perspective demonstrates that the Church is older and prior to the tabernacle (as St Hermas put it in his Shepherd).

The image of union between Adam and God was less than that of the Apostles at Pentecost. It was only a foretaste of the Church. And now our taste is also incomplete: “grant us to partake of Thee more fully,” we say [Paschal Canon, 9th Ode]; that is, more fully, more completely -– there, in the Heavenly Kingdom. St Maximus the Confessor, in his scholia on the Areopagite, says that there was an image (eikona) there, while the Truth will be in eternity, in the future age.

The Church in the Revelation of St John the Theologian is the New Jerusalem, the New Heaven and the New Earth, the Bride of Christ, in Whom it pre-existed. In the Incarnation it came into existence as His Body, in which He dwelt (eskinosen) with us (cf., Jn 1:14, Rev 21:3). The Church became His Body, His fullness; the fullness of Him Who fills all in all (cf., Eph 1:22-23). Such is the Christological, pneumatological, and eschatological understanding of the Church. We can fully speak of the establishment and growth of the Church, because we may speak of our growth in it, of our en-churchment [votserkovlenii] and incorporation into Christ.

Homily for the Sunday of Orthodoxy, Given in the Cathedral of Trebinje, 2007

Bishop Atanasije (Jevtic) is one of the most outstanding contemporary Orthodox theologians. Born in 1938 in the town…

The Mystery of the Holy Eucharist

A Russian bishop, who had travelled to the West for the first time after the fall of Communism,…

The Heart is Deep: St. Gregory Palamas and the Essence of Hesychasm

Fr. Stamatis says that the Orthodox icon is light-creating while the Western icon is shadow-creating. And indeed, Western…