On the Church Council of the Russian Orthodox Church

On February 2, 2013, the Council of Bishops of the Russian Orthodox Church will convene in Moscow. His Eminence Archbishop Michael of Geneva and Western Europe shares his thoughts on the event: 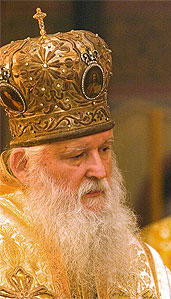 I won’t discuss specific problems and topics which will be discussed at this Council. A Council is the moment when the Church is guided by the Holy Spirit. The Council and its decisions are, for the Church, the very foundation of her life. Every member of the Council comes with his own troubles and concerns. But this fact does not play a role in its work.

Remember the reason for the convening of the First Ecumenical Council of Nicaea: Emperor Constantine requested that the bishops formulate the Church’s teaching of Christ. At this historic moment, Arius had been causing turmoil in Alexandria with his heresy. He declared that one cannot accept what the Church cannot say. For defining the nature of Christ, there was no corresponding word in the Greek language.

In Hellenic culture it was understood that what you cannot describe in words you cannot properly understand, or simply does not exist. If you have an object before you but you cannot name it, then it does not exist. Only that which can be described by words exists. In some ancient icons, one sometimes sees the depiction of a small person: the “hypostasis.” If he is not there, then nature has no meaning. If he is there, that means that this is some important element of the image.

And so they could not find a word to determine the nature of Christ, as Arius insisted. Arius was eloquent, handsome, cultured. He was supported by ninety percent of the bishops at the Council. St Nicholas, St Spyridon of Trymithous and St Alexander of Alexandria, however, affirmed that the Gospel states that Christ is the Son of God, which describes His nature as being Divine and human…

Deacon Athanasius was present at the Council, the future Patriarch of Alexandria. Observing these heated arguments, he suffered profoundly. Suddenly he asked for a word and said “There is such a word! Homousisos, ‘of one Essence!’” And the entire episcopate arose in joy that the needed word was found. ThiswasatriumphantmomentfortheChurch !

Arius rejected this decision. All the bishops had arrived sharing his point of view, but the Council concluded with a condemnation of him..

The very nature of a Church Council is the preservation of this power. When everyone arrived for the Pomestny [National] Council when Metropolitan Kirill was elected the new Patriarch, there were a great many opinions and preliminary statements made. But Metropolitan Kirill was elected almost unanimously. This is the nature of a Council’s decision.

I repeat clearly: the Church is not an organization, it is not an association or a conference. The Church is a living organism and behaves like an organism. Each part of it comprises the whole. Every part exists in its fullness and is indispensable to the Church. Not because as someone wrote, he is a member of the Church organism, for there is much in the life of the Church which we do not see.