On the Day of Sts Cyril and Methodius, Primates of the Church of Jerusalem and the Russian Orthodox Church celebrate Divine Liturgy in the Kremlin Church of the Assumption 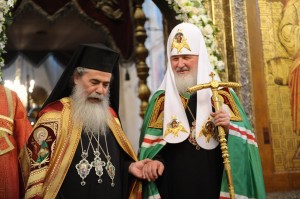 On May 24, 2013, the commemoration day of Ss Cyril and Methodius, Equal-to-the-Apostles, Teachers of the Slavs (Patriarch Kirill’s name day), and the Day of Slavic Literature and Culture, His Beatitude Patriarch Theophilos III of Jerusalem and His Holiness Patriarch Kirill of Moscow and All Russia celebrated the Divine Liturgy at the Patriarchal Cathedral of the Assumption in the Moscow Kremlin.

The two patriarchs were assisted by a great assembly of bishops and priests, including representatives of Local Orthodox Church at the Moscow Patriarchate and the delegation accompanying Patriarch Theophilos. Among the congregation were governmental and parliamentary officials as well as leaders of Synodal departments and mothers superior of stauropegial convents.

During the Litany of Fervent Supplication, a prayer was lifted up for the health of Patriarch Kirill, after which Metropolitan Juvenaly of Krutitsy and Kolomna read a Prayer of Thanksgiving on the Day of Honouring His Holiness the Patriarch.

After the liturgy, Patriarch Kirill delivered a homily, saying in particular:

‘Today the Paschal joy is augmented by the festivities in honour of Ss Cyril and Methodius Equal-to-the-Apostles, Teachers of the Slavs.

The holy brothers laid the foundation for the spiritual life of the Slavs and handed over to our ancestors the great treasure of the holy Orthodox faith. Gratefulness for the feat performed by the Teachers of the Slavs is invariably kept in our hearts.

Every time we celebrate their memory, we remember the sources of our faith and our devotion. Therefore, we cherish in a special way the presence here of living bearers of the spiritual tradition of Byzantium, representatives of Eastern Patriarchates, whom we treat with great respect and love.

With the baptism, Russia received from Orthodox Byzantium a new worldview system, in which the Holy Land has always occupied a special place. It is from that land that the liturgical rules and tradition came to us. With the spread of liturgical texts, our ancestors learned to revere the Holy Zion, ‘the Mother of Churches’ and ‘God’s Abode’ (Sunday Canticle, Tone 8). The continuous flow of pilgrims to the holy places was supplemented by a streamlet from northern countries to become with time one of the major sources of prosperity and preservation of the Orthodox holy places in Palestine.

Love for the City of God, which was handed down from Russian pilgrims to their kin, generated the perception of Jerusalem as an image of the upper, heavenly City, the future Kingdom of God, in which all life was concentrated around the liturgy, around a shrine. That is why the imitation of the Holy Land’s toponyms was so popular in Russia, which had her own Bethanies, Gethsemanes, Elyons…

And today we had the joy of celebrating the Divine Liturgy together with Your Beatitude, the Primate of the Orthodox Church of Jerusalem.

Making your peace visit to the Russian Orthodox Church in these Paschal days, you have brought us a blessing from the source of our resurrection – the Life-Giving Sepulchre of the Lord. By visiting Russia and celebrating in this old church, you have continued the good tradition of your predecessors, Patriarchs Theophanes and Paisisus, who worshipped under the vaults of the main church of Russia, the Kremlin Church of the Assumption, together with the Patriarch of Moscow and our pious sovereigns. You are the first Patriarch of Jerusalem to celebrate the Divine Liturgy in this historic church together with the Primate and bishops of the Russian Orthodox Church.

In the person of Your Beatitude we greet the Mother of Churches bearing the burden of care for all Orthodox pilgrims in the Holy Land. We welcome you as our beloved brother in the Lord, who prays for the whole Orthodox world at the Lord’s Sepulchre, who daily hands the Grace-giving Flame over to our pilgrims who bring it to Moscow for the Paschal martins, so that from Moscow it could be brought to numerous cities in Russia, Ukraine, Belarus and other countries. We thank Your Beatitude for your tireless service in the Holy Land, for your hospitality and pastoral consideration for numerous pilgrims from the Russian Orthodox Church.

We are also glad to have with us His Grace Bishop Cyril of Avida who has brought us a message of congratulations from our beloved brother, His Holiness Patriarch Bartholomew of Constantinople. Kindly convey to His Holiness the words of my sincere brotherly love and respect.

May the grace of God be with us all!’

In his response, the Primate of the Church of Jerusalem noted in particular that during his visit to the Russian Orthodox Church, he was met with brotherly hospitality. ‘Our fraternal relations, contacts and cooperation in Christ, which become increasingly close from day to day, have reached today its culmination as we celebrated the Divine Liturgy together with Patriarchs and an assembly of hierarchs’, he said.

Patriarch Theophilos congratulated Patriarch Kirill on his name-day and presented him with a set of two pectoral icons and a pectoral cross blessed on the Lord’s Sepulchre and a Patriarch’s crosier.

Then Patriarch Theophilos II and Patriarch Kirill led a procession with the cross from the Cathedral of the Assumption to the Monument to Ss Cyril and Methodius in Slavic Square.