On the Escalation of Violence against Christians in Syria 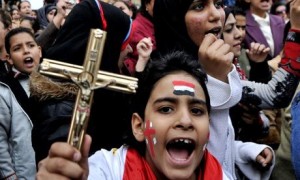 Syria lived in the atmosphere of inter-religious peace and concord for many decades while various communities of Christians, Muslims and Jews had good neighbourly relations and mutual understanding. Yet, after the armed conflict had broken out, the situation of religious minorities in the country has sharply deteriorated.

It is known that many radical extremists from various countries, whose aim is to “cleanse” the Middle East region from all non-Muslims, are among those committing terrorist attacks in Syria. As a result, Christians in Syria are facing persecutions which are becoming ever more threatening. According to Metropolitan Isaac of Apamea (Orthodox Church of Antioch), Syrian Christians see “something unthinkable happening after militants have appeared” in the country: churches are being destroyed, clergymen are being kidnapped, Christians are being evicted from their houses and being killed.

In April, Bishop Luke of Saydnaya (Orthodox Church of Antioch) told the media that almost one hundred forty thousand Syrian Christians had been banished from their houses and Christian churches were being systematically destroyed. “They are killing people. Human life is of no value for them,” he said.

On 22 April 2013, militants from an extremist group abducted Syrian Christian hierarchs: Metropolitan Paul of Aleppo (Patriarchate of Antioch) and Metropolitan Mar Gregorios Yohanna Ibrahim (Syriac Orthodox Church); the deacon who was driving the car was killed; the hierarchs are still held captive.

As was reported on 11 May 2013, militants have destroyed the ancient Orthodox Monastery of St Elijah the Prophet near Al-Qusayr: they have plundered the abode, taken away all church utensils, blown up the belfry and destroyed the altar and the baptismal font.

The Russian Orthodox Church resolutely condemns any violence and any attempts to stir up inter-religious hatred in Syria. The Moscow Patriarchate expresses solidarity with the suffering brothers and sisters, Christians in Syria, and hopes that the world community will pay due attention to these outrageous facts. Large-scale and gross violations of human rights must not be hushed up but must be actively opposed.