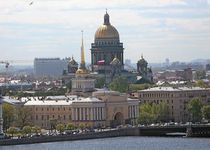 St. Petersburg, September 4, Interfax – On the eve of G20 summit in St. Petersburg, over 100 organizations advocating family values and representing civil society in the 33countries signed a statement to support the law recently adopted in Russia that bans propaganda of non-traditional relations among children.

“Natural family set up by the way of marriage between man and woman is a foundation of every human society and has a right to be protected by society and state, which is fixed in international norms on human rights, including Universal Declaration of Human Rights,” the document conveyed to Interfax reads.

The authors remind that “any initiative inflicting harm to a family is destructive for society” and children need special protection as “they are innocent and immature.”

In conclusion the authors of the statement urge to respect sovereignty of Russian people and ask all people of good will to support Russia, as well as Ukraine and Moldavia that face the same foreign pressure in connection with similar legal norms.

Organizations from European countries, Latin America and the USA, including such international structures as the World Congress of Families and European Large Families Association supported the statement. Spanish organization Professional for Ethics initiated the document.

Most viewed articles
Metropolitan Hilarion Said Kuraev Could Be Excommunicated from the Church414
A Cruciform Providence128
The Light of Christ in Christians99
The 16th Century Catholic Church in Granada Officially Transferred to the Russian Orthodox Parish88
Metropolitan Onuphry Speaks on True Repentance86
Time and Human Life75
Moscow Priests Make Over 1,300 Visits to Patients with Coronavirus51
Metropolitan Onuphry Presents Kiev Theological Academy with a Valuable Gift46
Thanksgiving Service on the 70th Anniversary of the Arrival of Russian Refugees Held in San Francisco44
“They asked me: why on earth do you need this?” At 58, Elena became a nurse at a covid hospital17
Most popular authors
Pravmir.com team729
Archpriest Stephen Freeman128
Metropolitan Sotirios99
George Mantzarides75
Timofei Butenko17
Maria Trushanina4
Archpriest Michael Gillis1