On the Significance of the New Martyrs and Confessors

In Russia in 1917, the scales tipped the other way, towards evil. Then large numbers turned against Christ and His Church. The greatest persecution in history began, with 600 bishops, 40,000 priests, 120,000 monks and nuns and millions of laypeople martyred for the Orthodox Faith in Russia between 1917 and 1991. Those who survived were confessors of the faith, for although they survived, theirs was a living martyrdom.
| 08 February 2009

There are many enigmas in history, but perhaps one of the greatest is how the Roman Empire became Christian. In the year 33 A. D., Christianity – and it was not even called that then – was seen by the outside world, if it was seen at all, as a tiny Jewish sect in Judea. And yet, 300 years later, it had become the official religion of a huge Empire, uniting Asia with Africa and Europe. How did the faithful few become the huge, international, intercontinental Orthodox Faith, taking over the Roman Empire and with representatives far outside it, in Persia, in Ethiopia and in many other lands, where Rome had never even set foot? How had a great and cruel Empire, with a complex infrastructure and sophisticated technology, fallen to the teachings of a gentle, despised and crucified man?

The answer one might expect is that there took place some huge war or invasion. But this was not the case. Instead, the Roman Empire fell to Christianity through the blood of the martyrs. Hundreds of thousands of men, women and children, slaves and nobles, rich and poor, young and old, from all backgrounds and all races, sacrificed their lives to become martyrs of the multinational Empire. In Greek the word martyr mean ‘witness’ and a martyr is a witness to faith in Christ, faith sincerely held, held with determination and self-sacrifice. Their faith transformed the world.

For the world can be compared to a giant pair of scales, in which all the good that we do is weighed against all the evil we do. When the balance tips one way or the other, so great transformations occur. This was the case with the pagan Roman Empire which turned to Christ. In the dying words attributed to the fourth-century neo-pagan Julian the Apostate: ‘Thou hast conquered, O Galilean’. Thus the scales tipped towards good. 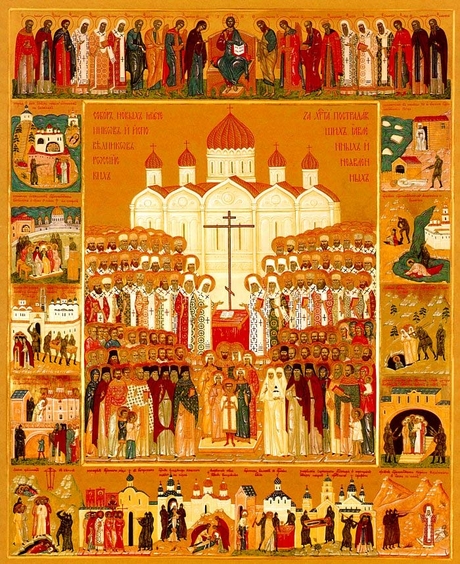 However, in Russia in 1917, the scales tipped the other way, towards evil. Then large numbers turned against Christ and His Church. The greatest persecution in history began, with 600 bishops, 40,000 priests, 120,000 monks and nuns and millions of laypeople martyred for the Orthodox Faith in Russia between 1917 and 1991. Those who survived were confessors of the faith, for although they survived, theirs was a living martyrdom. The first twenty-five years of this martyrdom were by far the worst, but the persecution did not cease after one mere generation. It went on.

The first sign that the balance was beginning to tip back again appeared only in 1981, 25 years ago this year, when the New Martyrs and Confessors were canonized by the free part of the Russian Church. A year after this event the miraculous Myrrh-Giving Icon of the Iviron Mother of God appeared and comforted the faithful. Shortly after that the persecuting forces in Russia began to fall and have been falling ever since.

Today, inside Russia, since the turning-point of 2000, when at last the Russian Church inside Russia was free enough to recognize its own New Martyrs and Confessors, the situation has changed. Churches have been built to the New Martyrs and Confessors, services to them are sung, books about them are written, icons of them are painted, their lives are chronicled. The greatest period of martyrdom and persecution in world history has ended. The scales have tipped back, towards good.

How far they will tip back is still unknown – the implications of their martyrdom and confessordom are still unknown. However, this much can be said. We all have a personal responsibility in this matter. Every individual act of goodness tips those scales towards good and every individual act of evil tips those scales back towards evil. Let us, this day, take responsibility for ourselves, ‘let us commend ourselves, and each other, and all our lives unto Christ our God’, tipping those scales towards good, towards the side of the New Martyrs and Confessors.

Holy New Martyrs and Confessors, pray to God for us!

Zacchaeus Sunday
Sunday of the New Martyrs and Confessors, 2006