The Resurrection is the core of our Orthodox Christian faith. It is why we are called Orthodox Christians. No-one else in all history has risen from the dead, defeating death through death. The Hindu gods failed, the gods of Greece and Rome failed, Buddha failed, Mohammed failed, the Popes of Rome failed, Luther failed, atheists and humanists failed, even Moses and the whole Old Testament failed. Christ alone did not fail. He rose from the dead, raising the righteous with Himself. That is why we follow Him, calling ourselves Christians.
admin | 03 May 2008 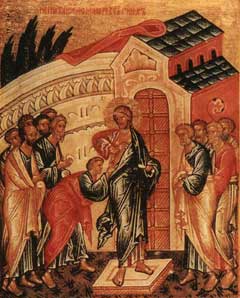 The Sunday after Easter is called by Anglicans ‘Low Sunday’. There is a certain truth in this name, for no Sunday can be as high a day as Easter Sunday. On the other hand, for Orthodox Christians, no Sunday can be called low, for every Sunday is a feast of the Resurrection. This is why in Russian the word for Sunday means ‘Resurrection’; and this is why in Church English ‘Sunday’ is called the Lord’s Day, as in Greek.

In the Orthodox world, the Sunday after Easter is known as ‘Antipascha’, which means the Sunday facing Easter, in other words similar to a mirror, this Sunday reflects the light of Easter. This is the light that we felt on Easter Night and all of us who came to vespers every day this last week have also seen and experienced that light, the light of Bright Week.

But this Sunday is also known as ‘Thomas Sunday’. Today we have heard the Gospel of Thomas and how he had to feel and see Christ’s wounds and the nail marks in His body in order to believe. In the middle of the church we can see the icon of this feast. It is a copy of a very ancient icon. On it you can see Christ standing before the sealed doors of which we have read and sung. He is surrounded by his disciples, not yet enlightened by the Holy Spirit of Pentecost. And there to one side, we see the very young face of His disciple Thomas peering at Christ’s side. As a result of Thomas’ doubt, the phrase ‘doubting Thomas’ long ago entered the English language. His doubt of course is providential for us. Here we have proof of Christ’s Resurrection. One who disbelieved has come to belief. Thomas did not know how the Resurrection was possible, and yet he saw and felt it with his own eyes and therefore believed it, for it would have been perverse to disbelieve. How can anyone now still not believe in the Resurrection of Christ after the testimony of Thomas?

The Resurrection is the core of our Orthodox Christian faith. It is why we are called Orthodox Christians. No-one else in all history has risen from the dead, defeating death through death. The Hindu gods failed, the gods of Greece and Rome failed, Buddha failed, Mohammed failed, the Popes of Rome failed, Luther failed, atheists and humanists failed, even Moses and the whole Old Testament failed. Christ alone did not fail. He rose from the dead, raising the righteous with Himself. That is why we follow Him, calling ourselves Christians.

We cannot understand this, for fallen human knowledge or science cannot yet understand this. Although science has learnt how to split the atom, it does not know how to put atoms back together again. Worldly science is at heart destructive, whereas the science of the Gospel is constructive, creative, resurrectional.

Thomas came to belief through this event of the Resurrection. He came to belief because he touched God, because God touched him. What does that mean for us, to touch God and to be touched by Him? To touch God and be touched by Him is to have some experience that takes us beyond and outside ourselves, to something greater than our little selves, to God the Creator. He is beyond our physical needs, our physical understanding, He alone can meet our spiritual needs, vanquishing death.

It can then safely be asserted that if we seek God, then we touch Him and are touched by Him. And in that way the dull, uncomprehending clay of our material being will be made into spiritual matter and we too shall thus pass through the sealed doors of our fallen hearts and minds and bodies towards the light of faith and understanding.

If, on the other hand, if we do not seek to touch and be touched by God, we shall continue to be dull, uncomprehending, sealed lumps of clay.

May we all seek God and be touched by the light of the Resurrection of His Body, through the prayers of the Holy Apostle Thomas.