The Bible does not explain why the name of Saul, the early persecutor of Christians, was changed to Paul, but also the Bible does not discourage speculation on the point. Undiscouraged, then, let us speculate.

A modern view speculates that the man in question had two names all along; he was known as “Saul” among Jews and as “Paul” among Gentiles. This explanation sounds reasonable, I suppose, to those of us who have Jewish friends we know as “Stanley” and “Ashley” at the bowling alley, but who are called “Shlomo” and “Hadasha” at the local temple. (Greeks are like this, too.) 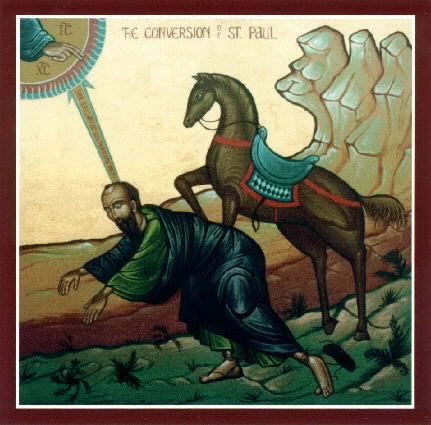 Among Christian readers over the centuries, however, the change from “Saul” to “Paul” has usually been associated with the man’s conversion from persecutor to Apostle. Thus, when William of St. Thierry published his commentary on Romans in 1137, he began the work with this prayer: “Thou hast known Saul, who derived the form both of his persecution and his name (formam trahentem iam persecutionis quam nominis) from a proud king and a persecutor, but Thou hast not known him from afar. For Thou didst humble him like a proud man wounded, and by the Spirit of grace, Thou hast changed him from Saul to Paul” (Exposition of Romans 1.1).

He began life, then, as Saul. Since the Apostle bragged to the Philippians that he was a Benjaminite (Philippians 3:5), it is not surprising that his parents would have named him for that ancient King Saul, who was a member of the tribe of Benjamin.

After his conversion, I suspect that the Apostle gradually became unhappy with the name “Saul.” He apparently adopted his new name during the early mission to Cyprus, where his preaching converted the Roman proconsul of the island, a man named “Sergius Paulus.” Luke describes this Sergius Paulus as “an intelligent man,” who “called for Barnabas and Saul and sought to hear the word of God.” Luke goes on to inform us, “. . . the proconsul believed, when he saw what had been done, being astonished at the teaching of the Lord.” This was the context in which Luke suddenly switches the Apostle’s name from Saul to Paul (Acts 14:6-12). From that point in the apostolic saga, the narrator always of “Paul,” never again of “Saul.”

The circumstances of his conversion, I believe, prompted this change. Let us recall that the Lord, when he encountered Saul on the road to Damascus, shouted out to him, “Saul, Saul, why do you persecute me?” When he heard that voice of reproach, Saul immediately recognized the irony of his name, an irony enunciated in Jesus’ very question. He recognized that voice. It was the voice of David wandering in the desert, during that period when he was pursued by Israel’s first king.

The great sin of the ancient Saul, as Holy Scripture describes it, was his persecution of the Lord’s Anointed One. When the future Apostle heard that question—”Why do you persecute me?—he was confronted by a massive fact: Just as the ancient Saul had persecuted David, this new Saul was persecuting David’s son! And this persecutor recognized the same voice of reproach.

While this verbal correspondence suffices to demonstrate Luke’s intent as the author of Acts, it is also worth considering the Semitic original of Jesus’ question, since we are told he spoke to Saul tei Hebraidi—”in Hebrew” (Acts 26:14). In Hebrew the burden of the question Saul heard from Jesus was essentially the same conveyed in the earlier question of David. David had asked Saul, mi ‘attah rodeph—”Whom do you persecute?” Jesus now asks the new Saul, lamma tirdepeni—”Why do you persecute me?”—’anoki Ieshu’a ‘asher ‘attah rodeph—”I am Jesus whom you are persecuting.”

Hearing this, Luke tells us, Saul was struck with blindness, like the blindness of Israel’s first king, in the dark cave at Engedi. And during those days of darkness Saul could still hear ringing in his ears, the same question that David had put to his own persecutor. This accusing voice would haunt the Apostle for the rest of his days. In his former life, he imagined himself God’s faithful servant, but Paul learned that he had been, in fact, just another Saul.