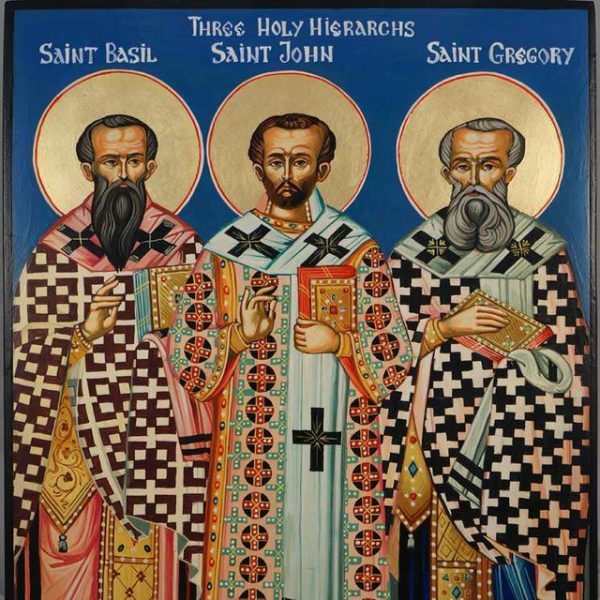 The first day of the civil new year begins with two feasts of our Lord, God and Savior Jesus Christ. The Orthodox Church also celebrates great saints in January. The liturgical texts for this month, blessed by His Eminence Metropolitan Joseph, are now ready for clergy and laity to download from the Online Liturgical Guide.
On New Year’s Day (*January 14 in Julian calendar), we commemorate St. Basil the Great, archbishop of Caesarea in Cappadocia, who reposed peacefully on January 1, 379. Many of his theological, ascetical and canonical writings, as well as his Divine Liturgy, remain with us.
On that same day, eight days after His nativity, our Lord consented to be circumcised in the flesh in order to become the only human to fulfill the Law of Moses. This act of humility and servitude shows that our Lord identifies with the low estate of His people to deliver them from sin and death by introducing God’s grace that supersedes the ancient Law.
From there, the Orthodox Church moves to our Lord’s Theophany – His baptism by St. John the Baptist in the River Jordan. In this great feast on January 6/19, we celebrate the revelation of Christ as God. Theophany is also known as the “Feast of Lights” in that Jesus, by His baptism in the River Jordan, enlightened the world. Christ’s baptism also marks the renewal of humanity: our Lord is clean and He shows us how we must be cleansed of sin by drowning it in the waters which He blessed by entering them.
Many Orthodox Churches offer two services of the Great Sanctification of Water on Theophany: indoors, where the faithful can drink the water and take it home; and outdoors at a stream, river, lake or ocean. For this feast, we celebrate two divine liturgies – the Vesperal Liturgy on the evening of January 5/18 after a day of strict fasting, and the Festal Liturgy on the morning of January 6/19. Thus, we can receive Holy Communion twice in one liturgical day (sunset to sunset), but one time each on the Eucharistic days (midnight to midnight).
On January 16/29, the Orthodox Church remembers the precious chains of the holy and glorious Apostle Peter. As he sat in prison shackled by the lawless Herod, an angel appeared to him: “Suddenly the angel of the Lord stood by him and a light shone in the cell. He tapped Peter on the side and awakened him, saying: ‘Get up quickly.’ The chains fell from his wrists” (Acts 12:7). The chains were preserved by Christians in Rome and known for their healing powers.
On January 30/ February 12, the Church commemorates our Fathers among the Saints and Ecumenical Teachers Basil the Great, Gregory the Theologian and John Chrysostom. This tenth century feast ended a dispute and strife about which saint was greatest that arose among the notable and virtuous men of that time. The three saints appeared together to the saintly bishop, John Mavropous, and told him that they have equal glory at the throne of God, and told him to compose a common service for the three of them, which he did with great skill and beauty.
The Online Liturgical Guide, produced by the Department of Liturgics, provides the official, uniform word-for-word texts to be used for the divine services in all parishes across the Archdiocese. Should you have any questions, please contact Subdeacon Peter Samore at OLG@antiochian.org.
Tweet
Donate
Share
Since you are here…

The weekend of May 21-22, 2022 marked the 100th anniversary celebration of the founding of St. George Church in…

Most viewed articles
The Trap of Religiosity90
Faith and Moral Freedom82
Patriarch Kirill: “The Memory of the New Martyrs will Help Us to Be Faithful to Christ amid Modern Temptations”81
Bishop Nicholas of Manhattan visits Holy Cross Monastery in West Virginia78
Lord, Save Me!68
Patronal Feast Celebrated in St. Anna Convent in Vashkivtsi43
Condolences of Patriarch Kirill over the death of believers in the fire that broke out in Abu-Seifein Church in Cairo38
St. Tikhon Church to host Liturgical Music Symposium in October 202228
25 Years of Help: the Ship-Church Goes On its 25th Voyage to Distant Villages28
Most popular authors
Pravmir.com team296
Vasileios Stoyiannos90
Archpriest Michael Gillis82
Fr. Theodore Stylianopoulos68