The Angel of our Church has departed to pray for us before the Lord in Heavenly monasteries. Words are powerless to express our grief. These 18 years of the Church life will remain with me forever. I see his inquisitive look, his slightly ironic smile, “Well, how is it going?” “So, have you already felt yourself a priest?”
| 08 December 2008

Orphans – that is how we felt, having heard about the death of the Patriarch. These days the word “deserted” is almost in each conversation, in each blog, forum, it is in the eyes and in the hearts. At first we did not believe it since the  “false” alarms took place rather regularly, with the most recent happened in spring when the media wrote about the “death” of the Patriarch. We did hope that despite the fact that we are all mortal, and that the Patriarch is turning 80, it will occur some time later, much later, many years from today.

Many of us came to church and were baptized and started our Christian life in the time of Alexiy II. Many of us don’t remember the church services without his name being pronounced.  And although to many of us this seemed to be a formality, we felt today how this prayer for his soul has united all of us. And how odd it is not to pronounce his name at the service. For a long time we will be doing these mistakes, saying involuntarily “His Holiness Patriarch Alexiy”… 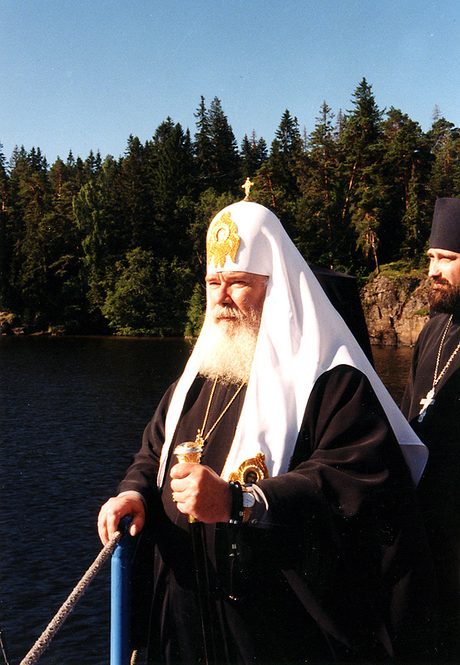 The Patriarch has followed metropolitan Laurus on his way into eternity. He has left after having built up the Church from the Soviet ruins, having restored its unity after one of the hardest splits, and having revived the Church. 20 years is not a long time for history, but in that period of time the Russian Orthodox Church has grown from a forbidden and underground church into a triumphing one. And though we tend to say how much work is there to be done, how many problems there are to be solved, millions of people have come or have begun their way to God, visiting the newly open churches, taking children to the parish schools, and reading orthodox books. The voice of the Church in Russian society and in the world has become really powerful. The Patriarch’s speech in the PACE  was widely discussed by the central Western media, the restoration of the unity of the Church was a global event.

There are no insignificant dates and days without special sense in Church. That the last Patriarchal service took place on the last  of the twelve great feasts of 2008 – the Introduction to the temple of the Mother of God – is a remarkable sign. Even more remarkable is that after the service the Patriarch went to pray to the Patriarch Tikhon, the first patriarch of the Russian Church after hundreds of years without one, who led the Church in the most difficult years after the revolution. That day was the 91st anniversary of his enthronement. It was as if Alexiy II has received the blessing to end his way. Moreover, this was the day when 77 years ago the Cathedral of Russian Orthodox Church, the Temple of the Christ of the Savior, had been blown up. It was the Cathedral restored in the 90-ies by Patriarch Alexiy.

Today each of us has warm words about him. Some will carefully cherish the memory of a personal encounter, some—the honor of taking the Holy Communion from his hand, some will remember the simple and deep words of the Most Holy, and some will recollect how intensively he lived, having services almost daily (and after all the Patriarchal services that last for hours and are difficult even for the young), and during the time remaining constantly visiting orphanages, schools, conferences, temples, dioceses.

The Angel of our Church has departed to pray for us before the Lord in Heavenly monasteries. Words are powerless to express our grief. These 18 years of the Church life will remain with me forever. I see his inquisitive look, his slightly ironic smile, “Well, how is it going?” “So, have you already felt yourself a priest?” And very thoughtfully, “so how are they, do they come?” [To God] – about the prisoners in Butyrkskaya prison… My lord and father! Until my heart is beating, I will not cease to remember your name. I believe that you will not forget me in your your sacred prayers!

No one is eager to remember that, but life is always finished by death. And the death always comes unexpectedly…

Yes, I saw the Patriarch many times during the services. But (I even have a videotape) in my memory I keep those minutes of short dialogue when the Most holy Patriarch came to Kalmykia in 1997 for the consecration of the Kazan cathedral. His words remained in my heart and led me to enter the Belgorod seminary. This blessing has undoubtedly changed my life. I believe that much in my life was arranged by the blessing of the Patriarch. God has given to the Most holy Patriarch to take Holy Communion on the day of  the Introduction to the Temple of the Mother of God. What more can I say? It is difficult to say anything, therefore we simply have prayed for him. I think this is the most important thing now.

I remember how the Patriarch came to our children’s home. We had been preparing for this arrival for not less than two weeks. The girls gave a concert and a play. After the visit they kept saying, “the Most Holy ate almost nothing!” He ate pies. He said, “big pies are my enemies, and small pies are my friends!” This phrase of the Patriarch then was recollected constantly.

Besides that, I remember when I was working at the Bakulev Hospital  the Patriarch was there on treatment. I asked a nurse from the department where he had been treated, “how is your important patient?” “Well, he’s very quiet and undemanding. He agrees to everything and he’s not demanding at all. I did change my opinion about the Russian Orthodox Church after that.”

There was once a religious procession, I was on a sidewalk with a friend observing the event which was new to us. It was 1994 or 1995. The religious procession was headed by the Patriarch. Our eyes met. I attentively looked into his eyes which were unfamiliar to me. I was amazed to see something not typical. Probably you can call it conviction and certainty. What is the person so sure of? What are his values? And that’s how I have come to church. Certainly, I don’t have a piece of his conviction, but at least I know what to aspire to. I saw eyes…

On Good Friday of 2007 I was in the Cathedral of Christ the Savior. I was listening attentively to his sermon. His words seemed quite ordinary, but for me it is very important what the person feels when he says something. He was not indifferent, he was sincerely feeling each word…

We are deserted. And we believe that the Patriarch who was so concerned about the Church, about all of us, will not leave us and will keep praying, but now before the throne of the Lord. We will recollect today the words of condolence which the Patriarch has told on the death the metropolitan Anthony of Sourozh. This condolence echos in our memory, “It is a huge  loss… for all the orthodox world. This world was left by a man who has become father and friend for many. We believe that his death, as well as a life, is the glory of Christ”.

Give rest, O Lord, in the dwelling of the righteous, your servant Holy Patriarch Alexiy!

Let us pray for him!