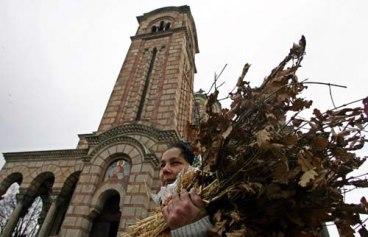 Liturgies and other traditional ceremonies in Orthodox churches and city squares will be staged for the SPC and its believers to celebrate the Christmas Eve and prepare for the most joyous of holidays, the birth of Jesus Christ. On Christmas Day, January 7, Christmas liturgies will be served in churches and the traditional Christmas bread will be cut out.

Serbian Patriarch Irinej will serve the Christmas Liturgy in the St. Sava’s Temple in Belgrade.

Serbian President Tomislav Nikolić will attend the Christmas Liturgy in Belgrade’s Cathedral Church which should be served by Bishop of Hvostan Atanasije Rakita.

Christmas Eve is the final day of the Christmas fast and a time when the Yule log is traditionally brought into Orthodox homes.

The Yule log is usually a young oak tree and it symbolizes the tree which, as the tale has it, shepherds brought to Joseph and Mary to set on fire and keep the cave warm after Christ was born.

Apart from the SPC, Christmas is celebrated on January 7 by the Russian Orthodox Church, the Patriarchate of Jerusalem, Mount Athos, believers in Greece and Egyptian Copts who adhere to the Julian calendar.

The SPC celebrates Christmas for three days and on the Christmas Day the Liturgy of Saint John Chrysostom is served.