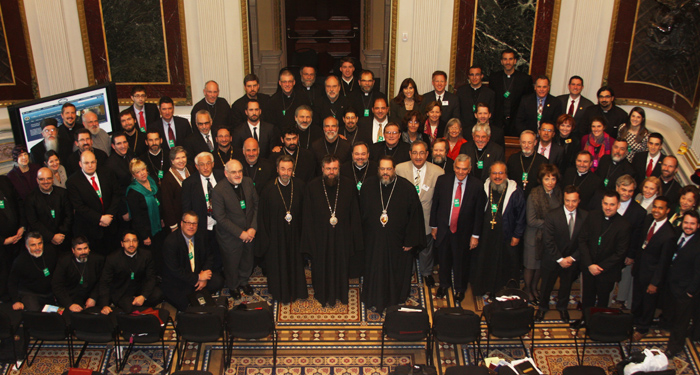 Also present were His Eminence, Archbishop Nicolae of the Romanian Orthodox Archdiocese in the Americas and liaison to IOCC from the Assembly of Canonical Orthodox Bishops of North and Central America; His Grace, Bishop Gregorios of Nyssa of the Carpatho-Russian Orthodox Diocese; His Grace, Bishop Sevastianos of Zela, Chief Secretary of the Greek Orthodox Archdiocese Eparchial Synod, representing His Eminence, Archbishop Demetrios of America, a member of the Presidential Commission for Faith-Based Organizations; IOCC Chairperson Michael S. “Mickey” Homsey; numerous IOCC board and staff members; and other clergy and lay representatives engaged in outreach ministries.

“The opportunity for this level of discourse with the White House is an important way to build understanding between our communities and contribute toward serving needs here in the United States,” said Homsey. “The conference is an important step toward uniting the efforts of Orthodox Christians to effectively serve their communities and builds on similar service IOCC has provided in more than 50 countries around the world over the past twenty years.”

The half-day conference brought together the community’s leadership to learn more about its multifaceted ministries and to explore potential collaborations offered by the federal government to support the Church’s service work.

“The Orthodox Christian community plays a critical role in social outreach, disaster response, and community development,” said D. Paul Monteiro, Associate Director of the White House Office of Public Engagement. The conference provided a forum for dialogue on that outreach and areas for mutual cooperation.

Preceding the White House conference was a gathering of IOCC’s Frontline, a national emergency response network comprised of volunteers trained in disaster response.  Frontline was organized after the events of 9/11. IOCC recently deployed members of the Frontline to assist in coastal communities along the Eastern seaboard following Superstorm Sandy and seeks to expand its network of volunteers nationally to serve more communities through disaster preparedness and emergency response.

Most viewed articles
Unbalanced Fears124
When We Do the Wrong Things Habitually118
Metropolitan Onuphry: “Do Not Be afraid of Demons, They Have No Power”97
The Tattoo on Our Being78
Delegations of Local Orthodox Churches Arrive in Kiev for the Celebration of Baptism of Rus68
350 Thousand Believers Take Part in Cross Procession in Kiev62
St John of Shanghai Summer Camp Concludes in Switzerland36
Most popular authors
Pravmir.com team263
Fr. James Guirguis124
Abbot Tryphon118
Fr. Andreas Agathokleous78