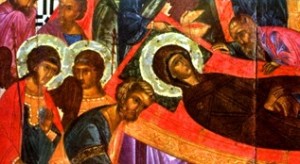 For Eastern Orthodox Christians all over the world following the traditional calendar, two weeks of fasting begin Tuesday morning in preparation for the feast of the Dormition (“falling-asleep”) of the Ever-Virgin Mary, the Birthgiver of Christ (Gk. Theotokos).

From August 14-28th (as reckoned according to New Style, which corresponds with August 1-15th Old Style), Orthodox will abstain from meat, dairy products, and fish and restrict their eating depending on their local guidelines. In many cases, this usually entails a virtually vegan diet, although shellfish is often permitted. The Ustav, a detailed series of instructions concerning matters related to the Orthodox Church’s service days, prohibits the use of wine or oil on weekdays during the fast. On weekends, wine and oil are permitted, and during the feast of the Transfiguration (Aug 19 N.S.) fish is also permitted.

The Dormition Fast is usually the shortest of the Orthodox fasts, lasting 14 days before the Feast of the Dormtion (August 28th New Style, also known as August 15 Old Style), which commemorates Mary’s peaceful repose and her body taken up into heaven after her burial. It is considered one of the holiest days of the Church year.