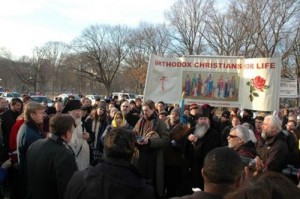 On the eve of his Enthronement as Primate of the Orthodox Church in America the weekend of January 26-27, 2013, His Beatitude, Metropolitan Tikhon, together with other members of the Holy Synod of Bishops, clergy, seminarians and faithful of all ages will once again gather in the US capital for the annual March for Life this Friday, January 25.

Marchers are invited to gather under the “Orthodox Christians for Life” banner at the Ellipse at noon. They will march to the Supreme Court, where Metropolitan Tikhon will offer prayers for the victims of abortion.

On Thursday, January 24, Metropolitan Tikhon will preside at the celebration of Vespers at the OCA’s Saint Nicholas Cathedral, 3500 Massachusetts Ave. NW, at 6:00 p.m. A reception, to which all marchers are invited to attend, will follow.

Additional details and general information on the March may be found at www.marchforlife.org.

Metropolitan Tikhon will be enthroned as Primate of the Orthodox Church in America during the Divine Liturgy at Saint Nicholas Cathedral on Sunday, January 27.