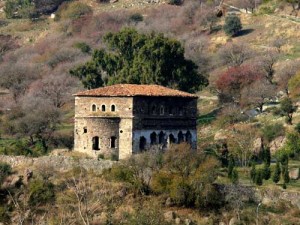 Profitis Ilias is set to be demolished at a time when the ambitious plans of the Izmir Municipality to revive lost city monuments are in full swing. [Esref.Ucar/Panoramio]

Plans for a new highway are threatening one of the last surviving Greek Orthodox churches in the region of Izmir (Smyrna) in Turkey.

Profitis Ilias (named after the Prophet Elias/Elijah, a revered figure for both Christians and Muslims) is a three-aisled basilica commissioned in 1846 by the Ecumenical Patriarch of Constantinople Anthimus VI.

Its dimensions are 10 by 19 meters and it has a quadrilateral rooftop. It lies on a prominent spot on the road to the suburb of Budjah, 2 kilometers southeast of the city center, in St Anne’s Valley, where the Meles River (Yeşildere) flows under the Sirinyer and Yesildere aqueducts, which date to Roman times.

Profitis Ilias is set to be demolished at a time when the ambitious plans of the Izmir Municipality to revive lost city monuments are in full swing. Recently an entire neighborhood near the slopes of Mount Pagos and the Kadifekale fortress was razed to the ground in order to allow for the excavation of the scant remains of an ancient Roman theater. The authorities plan to reconstruct the theater and put it to use.

Today, the church lies dilapidated, as Achilleas Chatziconstantinou, a Greek geographer and researcher of the historical topography of Izmir, says. The external porch is completely missing and there is a huge hole on the western side where the main entrance was. The interior of Profitis Ilias has been ransacked. Because of its size and the fact that it was built far from the town, some describe it as a monastery, but the absence of other structures suggests otherwise.

There are many postcards from the pre-1922 era that show the church in an idyllic location among tall trees, the river and the aqueducts. In fact, it was a popular countryside destination for the inhabitants of Smyrna. In his books, Christos Solomonides also names the last priests who served there in 1922: Aristarchos and Agathaggelos.

After 1922 and the population exchanges between Greece and Turkey, the area was declared a restricted military zone and the church survived as an ammunition depot. However, while this designation served as protection for as long as the area remained a military zone, the Izmir Municipality’s plans for the construction of a new highway have now put its very existence in danger.

In 2011, Doğay Korkmaz, a postgraduate student of architecture at the Izmir Institute of Technology, presented his master thesis, titled “Investigation of Conservation Problems of the Prophet Elias (Elijah) Church in Izmir,” the only known study of the church so far. The potential destruction of Profitis Ilias will erase all hope for future research on the structure and remnants from previous eras that might still exist on the ground. This would have a negative impact on the study of Christian Smyrna and most of all on the history of the Greeks of Asia Minor, whose places of worship continue to vanish at an alarming rate after 90 years of neglect.