Tuesday morning, in accordance with the multi-year tradition, Patriarch of Moscow and all Russia Kirill has recited the liturgy in the Assumption Cathedral in the Moscow Kremlin on the occasion of the Dormition of the Theotokos, one of the main holidays of the Orthodox calendar. 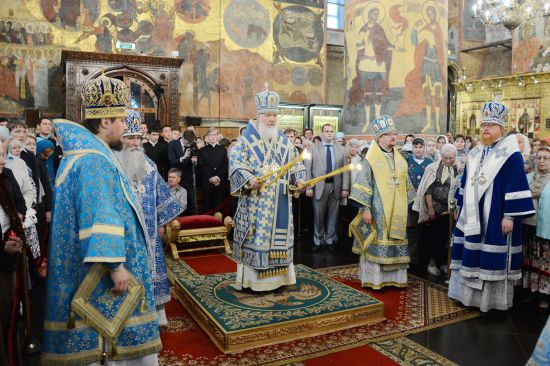 The Dormition (death) of the Mother of God dates back to the year of 48 BC. After Christ’s death, Virgin Mary lived for 15 years, and she spent all these years in praying and fasting. That is why the Feast of the Dormition is preceded by a two-week fast.

According to the legend, the Mother of God departured from the earth after the Archangel Gabriel appeared before her and announced her near assumption into Heaven; and he left a palm branch as a symbol of it. And it miraculously happened so that by the day of the assumption of the Virgin Mary, all the Apostles had gathered in Jerusalem, where she lived at the time.

After two o’clock, a dazzling light began to shine in the house, where Mary and the disciples of Jesus were staying. The ceiling disappeared in its radiation, and Christ appeared in the room surrounded by angels. Then the Holy Virgin stood up from her deathbed, and bowed to Him. She handed her soul over to her Son and God without any bodily suffering, as though in a pleasant dream, the legend tells.

The Mother of God was buried in the garden of Gethsemane, but three days later, when the apostles opened the grave, they only found grave wrappings in it, as not only the soul, but the body of Mary had been taken to Heaven by God. That same evening she appeared before the apostles and said: “Rejoice! I am with you forever”.

The Dormition of the Theotokos has long been associated with the beginning of an Indian summer.