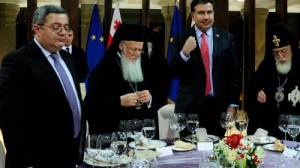 From left to right: Parliamentary speaker Davit Usupashvili; Patriarch Bartholomew I of Constantinople; President Saakashvili and Patriarch of the Georgian Orthodox Church Ilia II at an official dinner in the presidential palace, January 10. Photo: President’s administration.

President Saakashvili received leaders of Orthodox Churches on January 10. He said that Patriarch Ilia II’s jubilee was a “celebration” for whole Georgia.

Parliamentary Chairman Davit Usupashvili was also present whom President Saakashvili thanked for “his contribution to organize all these events with all of us.”

Patriarch Bartholomew I is expected to meet PM Bidzina Ivanishvili on January 11, according to the Georgian Patriarchate.

Patriarch Bartholomew I of Constantinople is viewed as spiritual leader of the world’s Orthodox Christians, but he has no jurisdiction over other autocephalous (independent) Orthodox Churches, including the one in Georgian.