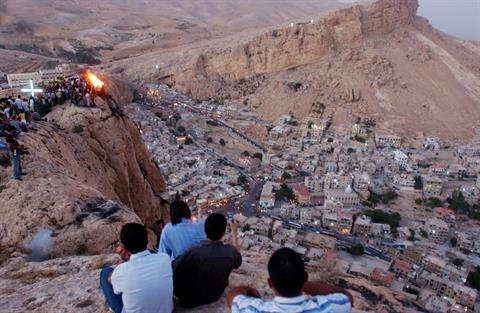 In this Wednesday, Sept. 13, 2006 file photo, thousands of Syrians, most of them Christians, celebrate the Christian Day of the Cross, by setting a fire on top of a mountain in the village of Maaloula, north of Damascus. (AP Photo Bassem Tellawi)

BEIRUT: The Orthodox Gathering called Friday on the U.S. to weigh carefully plans to launch a military strike against Syria, warning such an attack would threaten the presence of Christians in the region.

They also criticized the international community for remaining silent over a recent attack in the predominantly Christian village of Maaloulah north of Damascus carried out by Al-Qaeda linked rebels.

“The Orthodox Gathering … is concerned with what is happening in terms of attacks and the repercussions which poses the gravest danger to [our] existence,” the group said in a statement.

“[It] calls on the global conscience, particularly that of the United States, to think seriously of any grand measure or strike which would reflect [negatively] on the existence of Christians in Syria, Lebanon and the rest of the East,” it added.

Referring to the Maaloulah incident, the group said the gunmen had attacked the village, burning crosses and pictures of saints in houses and shelled the St. Elias Church.

Maaloulah is a predominantly Christian village with many residents maintaining the Aramaic language, the language of Jesus.

“What is noteworthy is that the gunmen, when they broke into Maaloulah, … released a statement saying the aim of the aggression was to free the village from the Crusaders,” the Gathering said in the statement.

“We are Arab Christians and not a permanent Crusader community; we are rooted in the Arab East and Arab land,” the statement said.

The attack was spearheaded on Maaloulah by Jabhat al-Nusra, a radical group designated as a terrorist organization by the United States. It includes Syrians and foreign fighters from across the Muslim world.

The attack on Maaloulah prompted former President Amine Gemayel Thursday to contact U.N. Assistant Jeffrey Feltman, U.N. official in Lebanon Derek Plumbly, as well as the ambassadors of The Vatican, France, Britain and the United States. He urged them to help end the attacks there.

The Gathering also described the gunmen in Maaloulah as part of a neo-Zionist movement that is threatening the region with a sectarian war.

“Did the world, particularly the Americans, Europeans and Russians, notice that amid the possibility of a strike against Syria a historic element is now threatened with demise?” the group asked.

It also called on Christian patriarchs in the region to take courageous steps and put forward a unified stance.

“A unified stance by the church is a needed incentive for politicians, particularly in Lebanon and in the Arab [region], to get together, discuss and place strategic plans that encourage survival,” it added.