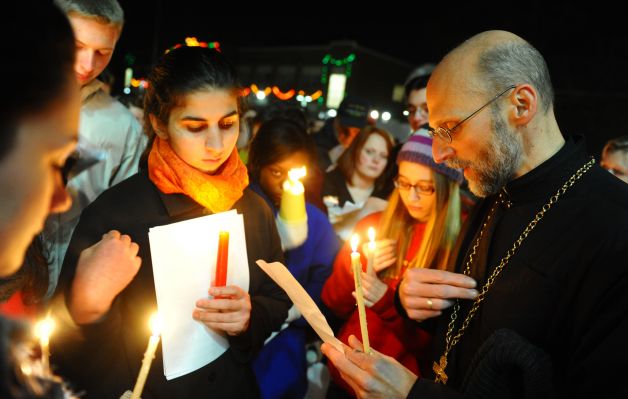 His Holiness Patriarch Kirill’s condolences over tragedy at the School in Newton, Connecticut, USA

His Holiness Patriarch Kirill of Moscow and All Russia expressed his condolences to the President of the United States, Mr. Barack Obama, over the tragedy at the School in Newtown, Connecticut, that claimed the lives of twenty-seven people. The full text of the message is given below:

The news of the terrible tragedy at the Sandy Hook Elementary School in Newton, Connecticut, has resonated in my heart with deep pain and grief. Please, accept my sincere and cordial condolences.

This evil deed claimed the lives of people, most of whom were small children.

The murderer did not spare either defenseless pupils, or his own parents.

The Russian Orthodox Church shares the grief of the people of the United States and sorrow of the parents who lost their children, prays for the repose of the souls of the victims and consolation of those mourning, and hopes that such a tragedy does not recur.

+KIRILL, Patriarch of Moscow and All Russia

Metropolitan Hilarion of Volokolamsk expresses condolences over the tragedy at Sandy Hook School in Connecticut, USA

Metropolitan Hilarion of Volokolamsk, chairman of the Moscow Patriarchate’s Department for External Church Relations, expressed his condolences to the Governor of Connecticut, Mr. Dannel P. Malloy, over the tragedy at Sandy Hook School in Newtown, that claimed the lives of twenty-seven people, most of them children. The text of the message is given below:

Please, accept my deepest condolences over the tragedy at Sandy Hook School in Newtown. Many people, most of whom were small children, fell victims to this tragedy.

The way the teachers acted inspires respect: thanks to them, dozens of pupils have been saved. With all my heart I sympathize with the parents, relatives and friends of those who died or were injured. I ask you to convey to them words of consolation and support.

I offer up my zealous prayers to the All-Merciful Lord for children to live peacefully and without troubles under the protection of parents, society and law in all corners of our planet.

“Oh Lord, Have Mercy Upon Mankind…”

Once again we find ourselves confronted with the horror of what mankind is capable of – the almost inhuman deeds of man against mankind.  It comes just before the time that we will commemorate the Holy Innocents murdered in Bethlehem at the orders of a malicious ruler – Herod – who sought  to protect his obscene rule from the threat of the King of kings – our Lord and Savior Jesus Christ, the Promised One, Who, it was determined, was to be born in the town.  Having been “mocked” as he perceived it, by the three kings who failed to return to tell him where the Child was, he ordered that all the male children age two and under in Bethlehem be killed, hoping thus, to prevent the Messiah from rising up to offer the Truth of God’s love for mankind and about the sanctity of life. St. John Chrysostom rhetorically asks of Herod:

“Why are you angered Herod, at bring mocked by the wise men? Did you not know that the birth was divine? Did you not summon the chief priests? Did you not gather together the scribes? Did not they bring the prophet also with them into your court of judgment, proclaiming these things from times old? Did you not see how the old things agreed with the new? Did you not hear that a star also ministered to these men? Did you not reverence the zeal of the barbarians? Did you not marvel at their boldness? Were you not horror-struck at the truth of the prophet? Did you not from the former things perceive the very last also? How did you not reason from all these things that this event was not of the craft of the kings, but of a Divine Power, duly dispensing all things? And even if you were deceived by the three kings, what is that to the young children, who have done no wrong?”

When we began to hear the horrific news coming from another small town, Newtown, Connecticut, and the murder of innocents and adults, our fear was that it would be a tragedy beyond belief because some sick mind wanted to make a statement during these Holy Days.  Our worst fears have been confirmed.  Nearly thirty students and adults have been slaughtered – “having done no wrong” – and our hearts are heavy with pain and we weep as did Rachel of old.  We ask the perpetrator of today’s slaughter:  “Even if you hated your family, what is to these young children and their teachers, who have done you no wrong?”

We, along with all our clergy and faithful of the Holy Ukrainian Orthodox Church of the USA, express our profound sympathy to the parents and family members of those lost.  We embrace you with in the Love of God and assure you of our continued prayers that the Almighty encompass you in His Comfort and Mercy.

We appeal to the mass media and beg that the individual or individuals not be “iconized” over the days, weeks and months ahead.  An icon is normally a holy depiction of a saintly or heavenly being worthy of emulation in their devotion to and faith in God and for their love of fellow man.  But evil can also be “iconized” – placed before society for horrific accomplishments, which defy all the laws of God and of man – very often denying the sanctity of life – gifted to mankind by our Creator and meant for only goodness.  We of the Ukrainian nation are all too familiar with this kind of evil – always remembering the ten million of our brothers and sisters – men, women and children – who perished because of the sick and evil mind of the Herod of new times – Stalin – who also sought to preserve his heinous rule.

“Lord, have mercy on us…strengthen the families of all affected by the loss of deeply loved children, teachers, parents and friends, however remotely, as well as each of us whose lives are once more scarred by man’s inhumanity to man.  Receive the souls of your children who have perished into Your loving embrace and give them rest in a place where there is no more such horror, pain and suffering in the Light of Your Countenance.  May their souls rest in eternal happiness and their memory be eternal from generation to generation in Your Heavenly Kingdom.”

We direct all our clergy and parishes to pray for the repose of the souls of those lost this day in a Memorial Service – Panakhyda following Divine Liturgy on Sunday, 16 December or on 23 December, and also to pray for their surviving family members, fellow students and teachers during the Litany of Fervent Supplication of the Divine Liturgy on these same days.

In our Lord’s all-encompassing Love,

+ Antony
By the Grace of God, Metropolitan

+ Daniel
By the Grace of God, Bishop

Bishop Gregory Calls For Prayers For the Victims of the Fatal Shootings In Newtown, Connecticut

JOHNSTOWN, PA [Diocesan Chancery] – His Grace, Bishop Gregory of Nyssa, upon learning of the horrific tragedy at the Sandy Hook Elementary School in Newtown, CT, where 26 people, most of whom were children, lost their lives during a mass shooting, has called upon the faithful of the Diocese to offer up fervent prayers for the many families and people affected by this catastrophe and the repose of the souls of the innocent victims.

Upon returning to the Diocesan Chancery this evening from the White House Conference on Orthodox Christian Engagement in Washington, DC, Bishop Gregory has issued the following statement:

I am shocked and greatly pained at this senseless loss of life. At this special time of the approaching Nativity of our Lord and Savior Jesus Christ, I am reminded of King Herod’s heinous act of murdering the 14,000 infants (the holy innocents) in his attempt to destroy the Christ Child. In Matthew 2:17-18 we read, “Then was fulfilled what was spoken by Jeremiah the prophet saying: A voice was heard in Ramah, lamentation, weeping and great mourning, Rachel weeping for her children, refusing to be comforted, because they are no more.” I strongly encourage all adults to hug their children, grandchildren, and Godchildren and tell them how much they love them today and every day.

The Diocesan Chancery has learned that while there are faithful of the diocesan parishes in Connecticut that live and attend schools in Newtown, it appears at this time, by the Mercy of God, that all are safe.

May our Merciful Lord God and Saviour Jesus Christ grant comfort, peace and healing to the grieving family and community members, and rest eternal and blessed repose to the souls of the holy innocents and the heroic teachers and staff members and establish them in Paradise where there is neither sickness, sorrow or suffering but Life Everlasting. May Their Memory Be Eternal!