Orthodox Missionaries to Albania to Speak on that Church’s Revival

admin | 05 August 2012
During decades under what was arguably the most repressive dictatorship of the Cold War era, the Orthodox Church of Albania was crushed by a militantly atheist government, its clergy imprisoned or killed. When the communist regime fell in 1990, just 22 elderly priests remained alive.
Today the Orthodox Church of Albania is the most vital institution in that nation, providing education, social services and jobs. This has happened under the guidance of Archbishop Anastasios, a Greek missionary who many Orthodox regard as a living saint. It has also happened with the aid of Orthodox missionaries from the United States, two of whom will be in the Pittsburgh area August 5-6, 2012 to tell their story.
Nathan Hoppe originally went to Albania in 1998 with his first wife, Lynette, to help rebuild the church there by teaching at the seminary and working among university students. They were sent by the Orthodox Christian Mission Center, a pan-Orthodox institution that was founded in 1985 to revive an Orthodox missionary tradition that had been largely eradicated under centuries of Islamic and then communist repression. Lynette Hoppe was diagnosed with cancer on a medical leave to the United States and, after learning her prognosis was fatal, asked to return to Albania and die among those she ministered to. She died and was buried there in 2006. 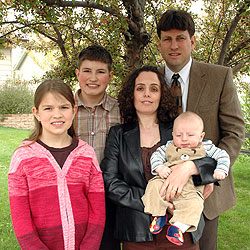 Mr. Hoppe has since remarried, and his wife Gabriela earned a master’s degree in children’s and family ministry to aid in their work. Among her innovations are family camps, which teach parents to teach the Christian faith to their children — a conversation that once would have resulted in prison for the parents. One of Mr. Hoppe’s main duties is teaching at the seminary.

Albania was once 70 percent Muslim and 30 percent Christian. But the 40-year regime of Enver Hoxha persecuted all people of faith with a vengeance unequalled even by Josef Stalin. He died in 1985 and the communist regime collapsed five years later, leaving a nation of people who had memories of a Muslim or Christian past, but rarely any understanding of that faith.
Since then at least 265 Orthodox churches and monasteries have been built or restored, hundreds of priests ordained and hundreds of thousands of people baptized. Yet the task remains daunting. Mr. Hoppe wrote this on the 20th anniversary of religious freedom in Albania:
“It was in November of 1990 as the communist regime began to weaken that the religious communities emerged from underground and began to worship publicly again. This reemergence showed that 23 years of complete official atheism had not been able to root out all religious belief from the hearts of the people but it also showed the tremendous toll which persecution had taken.
“The communities that emerged were only shadows of what they had been. their ranks had been decimated by persecution and martyrdom, their properties had been confiscated and destroyed, and their leaders were for the most part dead. The Orthodox Church, like the other religious communities, has now been in the process of rebuilding for 20 years. It has been tremendously blessed by the leadership of Archbishop Anastasios, and many miracles have occurred; but there are still tremendous challenges ahead on the path . . . . The destruction of the Orthodox community is something like the destruction of deforestation. It does not take long to chop down all the trees but it takes generations to grow them again. After may years in which the ground has lain bare after the trees were cut, the soil is eroded away and it is not even easy to plant again. New trees find it difficult to begin growing in the depleted soil and, when they do grow, it is slow and painstaking.”
The Hoppes are back in the United States to seek support for that work. They will speak Sunday, August 5, 2012 at 7 p.m. in St. George Antiochian Orthodox Church, 610 Dewey Ave., Bridgeville, Pa; and Monday after a 7 p.m. prayer service in Holy Cross Greek Orthodox Church, 123 Gilkeson Rd., Mount Lebanon, Pa. They will also speak briefly on Monday August 6 at 2 p.m. during the pilgrimage at Holy Transfiguration Orthodox Monastery in Ellwood City, Pa.
People with questions can call John Thompson at 724-710-7471.
Those interested in supporting their work can send checks designated for the “Hoppe Family” made out to the Orthodox Christian Mission Center at 220 Mason Manatee Way, St. Augustine, FL 32086
Source
Tweet
Donate
Share
Since you are here…