In our interactive age, some are critical that Orthodox laity appear to have no role to play in church life, and seem to be mere passive spectators of services. This impression is sometimes founded in reality, but only in dying parishes where laity may indeed have reduced their role to that of passive spectatorship. It is not the natural role of laity. Laypeople can only be passive if they wish to be passive.
| 30 July 2010

In order for a parish to start, three spiritual things are needful: faithful people; God’s blessing; the permission of the local bishop. Three practical things are also needful. These are: a group of people who wish to start a parish, including at least one who can sing; public-access premises to hold church services (private premises discourage visitors and encourage a ghetto mentality); a priest. Their importance is in that order, with the priest coming last. For example, if a group of faithful who have some musical ability have premises with public access, then sooner or later the local bishop will find them a priest, if only once a month at first, and later he may even be able to ordain a suitable candidate for the priesthood from among the faithful themselves.

In our interactive age, some are critical that Orthodox laity appear to have no role to play in church life, and seem to be mere passive spectators of services. This impression is sometimes founded in reality, but only in dying parishes where laity may indeed have reduced their role to that of passive spectatorship. It is not the natural role of laity. Laypeople can only be passive if they wish to be passive. If there are individuals who complain that laity have no role in Orthodox parish life, then they are complaining without reason. 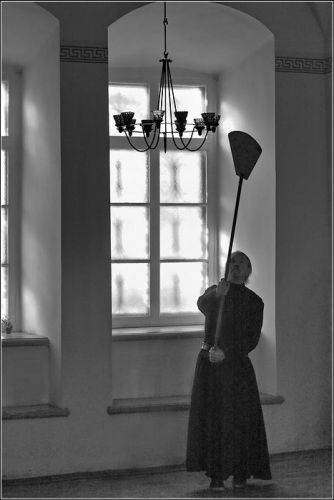 Today, for example, many Orthodox parishes in the West have a younger priest who is often exhausted because outside services he also has to earn his living in a full-time secular job. This is either because the laity are too few in number to support him, or else too ungenerous to pay him a stipend whereby he could work fewer hours in a secular occupation. At the same time, within parishes there are retired laity who have time on their hands and nothing else to do. Such priests are only too glad if laypeople pull their weight. It must be a matter for concern if they do not carry out many of the tasks incumbent on them for which a priest is not essential. If a priest working full-time elsewhere scarcely has time and energy even to devote to services, including baptisms, weddings, funerals, house-blessings, confessions, memorial services and services of intercession, then most certainly the laity should be supporting the community by carrying out other tasks. What are they?

Some may object that these are all menial tasks. We do not think so. These are essential tasks for if they are not done, a parish cannot live. A church cannot function if these tasks are not carried out. A church cannot live without bread and wine. If people want a community, then they have to work for it to create it. As they say: no pain, no gain. Today, especially in Western countries, many people seem to have adopted a Welfare State mentality, a consumer mentality, towards the Church. As a result they expect church services and activities to be laid on for them, as if it were their right. This is totally unrealistic. We have to combat the mentality which says that 80% of church activities are carried out by 20% of the parishioners and the remaining 20% of activities are carried out by the other 80% of the parishioners. To paraphrase an American President of some forty years ago: ‘Ask not what your parish can do for you; ask what you can do for your parish’. There is nothing so dispiriting as entering a church which feels neglected and unloved by its own supposed members. Such churches close down. As our Lord said: ‘Let the dead bury the dead’.

Finally, there is the one activity which we have not yet mentioned, in which most laypeople can participate: the choir. In principle, everybody should sing in church. In reality, of course there will always be some who do not wish to sing and really cannot sing. Nobody should ever be forced to sing. On the other hand, the reality is that in many parishes, the choirs which sing on behalf of all the people in response to the priest, are often very small. People should be encouraged to sing. Even those who are not musical can learn to ‘sing along’ in certain parts of the services, in a low voice. Here one of the problems is that bigger parishes, and especially Cathedrals, tend to have semi-professional choirs and paid ‘choir directors’. This tends to exclude ordinary lay participation. Although parishes do need people to lead choirs, the tendency to have ‘choir directors’ seems to me to have a secular origin in the mentality that church singing is a ‘concert’. It seems to me that we should speak not so much of choir directors, but of choir leaders.

True, every parish choir should have as large a musical repertoire as possible. One convert who came to our parish was astonished by the melodies he had never heard before. He had honestly thought that all parishes sang the same melodies, because at his church they only ever sang the same melodies for everything! On the other hand, most of the melodies sung should be fairly simple, so that they can be picked up by most people. Though the melodies should change, they should not change too often. There must be some continuity. Again every choir leader should ideally have one or two deputies. No parish should be dependent on one person. Others should learn how to sing and lead the choir. In the same way as any parish should eventually be able to provide a parish with a deacon and possible a second priest, so others should come forward to provide a parish with choir leaders.

Here above are some considerations about the role of laypeople in contemporary Western Orthodox parish life. We pray that they may bear fruit in the hearts of those who read them.