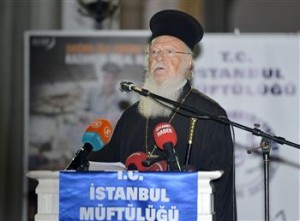 Fener Greek Orthodox Patriarch Bartholomew repeated his call to the Turkish government for the reopening of the Heybeliada Halki Seminary, saying that the religion was entering a dangerous phase due to a lack of proper religious officials.

Bartholomew was speaking at an iftar event organized by the Istanbul Müfti office, with Müfti Rahmi Yaran present, where the patriarch mentioned the closed Halki Seminary.   “We would like to mention at this time the importance of qualified religious officials in the society. Religious officials should always be properly educated and set examples based on their trainings throughout their life. We would like to emphasize the gravity of the situation of the Halki Seminary, closed since 1971, now that we are entering a stage of danger by lacking qualified religious officials,” the patriarch said.   Previous efforts have also focused on the Heybeliada Halki Seminary to be reopened, with the subject remaining on Turkey’s political agenda. The realization of plans however, has still failed to materialize.

Bartholomew also highlighted the need for dialogue between religious officials, adding that attending annual iftars was “a concrete show of love and respect for our Muslim brothers.”   Religious Affairs Directorate head Mehmet Görmez was also in attendance, and gave a speech following the prayer. Görmez said the need for thinking individuals and religious officials was evermore present in the current days, since most of the political aspirations failed to take care of the world.

“For years we cannot have joyful Ramadans, with all that is happening in the Islamic nations and Middle East region. The reason for all the incidents occurring in Baghdat and Cairo and Damascus cannot be Islam. The reason for all those can only be tempering with the Islamic people, the occupations, the exploitation of those lands, and the racism,” Görmez told the guess.

Representatives of the Catholic Church of Armenian and Syriac communities were also present at the event.   Deputy Prime Minister Bekir Bozdağ and European Union Minister Egemn Bağış sent their regards to the guests, the report said.