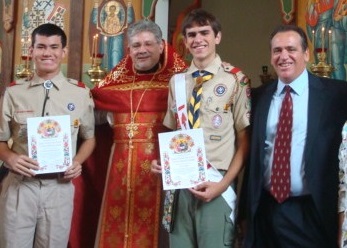 In years when February 8 falls on a Sunday, such as this year, the BSA’s birthday and Scout Sunday are combined into a single observation.  The Girl Scouts of the USA’s equivalent holiday is Girl Scout Sunday, commemorating the founding of the first Girl Scout troop in Savannah, GA in 1912.  It is celebrated during Girl Scout Week—the week that includes March 12.

In 1955, Joseph A. Brunton, Jr., the BSA’s Chief Scout Executive, played host at a luncheon honoring the top Eastern Orthodox hierarchs of the time— Archbishop Michael of the Greek Orthodox Archdiocese, Metropolitan Anthony of the Antiochian Orthodox Christian Archdiocese, Bishop Orestes of the American Carpatho-Russian Orthodox Greek Catholic Diocese of America, and Metropolitan Leonty of what today is the Orthodox Church in America.  The prelates arrived at the BSA’s national office North Brunswick, NJ, to “bestow their blessing on the Boy Scouts of America and to make known to their constituents that they wanted Scouting to become a part of the youth programs of the local Churches.”  This marked one of the first cross-jurisdictional enterprises of the Orthodox Churches in North America.  As a result of this historic meeting, the Eastern Orthodox Committee on Scouting [EOCS], recognized today by the Assembly of Canonical Orthodox Bishops of the USA as the Orthodox Scouting Commission, was created in 1960 by the Standing Conference of Canonical Orthodox Bishops in the Americas with the mandate to conduct the mission of our Lord and His Church via Scouting programs on a national level.  As time progressed, the EOCS included the Girl Scouts and Campfire USA.

It has been my great pleasure to be registered officially with the BSA for over 35 years.  BSA programs have traditionally considered reverence for and belief in God to be cornerstones for developing young men and women in character, citizenship and fitness. As an Orthodox priest, I have been able to encourage Scouts to earn their religious emblems, to serve as chaplains’ aides in their troops, to attend chapel services at summer camp and other outdoor program opportunities, to say grace at meals, to bring their prayer books and Bibles to Scout activities, and to become active participants in their local parishes. Orthodox worship has been offered at National Jamborees for decades, and since 2000 at National Order of the Arrow Conferences.

So, this Sunday, February 8, I encourage all of our pastors and Church leaders to recognize the Scouts, especially those who wear their uniforms to the Divine Liturgy; to consider chartering or sponsoring a parish Scouting; to invite Scouts in the community to perform service projects within the parish context; and especially to be a presence, as pastor or lay leader, at local Scouting activities. The BSA needs Orthodox clergy – please consider registering with the local Council.

As I celebrate my 50 years as an Eagle Scout this month, I reflect on the reasons that keep me serving as a volunteer in the program.  Many adults worked very hard in my youth to encourage me to complete the Eagle Award, so now it is “pay-back” time for me to do the same for today’s youth.  And frankly, Scouting is fun!  I enjoy Scouting activities, especially summer camp, by working with people of diverse backgrounds and travelling to places I’ve never been.

I have served as a summer camp chaplain at three camps for a total of 18 years. I have held positions as a Troop Committee Member, District Committee Member, Venturing Crew Adviser, Scouting Trainer, Unit and Round Table Commissioner, Merit Badge Counselor, Youth Protection Trainer, and Scoutmaster Fundamentals Troop Guide.  At present, I serve as a member of the Executive Board of Old Colony Council, Canton, MA, and as an Associate Advisor in charge of Duty-to-God of Tisquantum Lodge; Order of the Arrow; a Certified Camp Visitation Specialist; and a member of the Religious Relationships Committee of the Northeast Region. I have served as an Outreach Coordinator since 1990 for the EOCS, and for a number of years I have attended EOCS’s Scouting Retreat Columbus Day weekend at Saint Basil’s Academy, Garrison, NY, hearing confessions and celebrating liturgical services for several hundred Scouts and adult volunteers. I continue to be the Scouting Liaison for the Orthodox Church in America, a position to which I was appointed in 1997. I am especially honored to be invited for 20 years to serve on the staff of National Camping School’s Chaplains Section—a week-long intensive training program for summer camp chaplains—sixteen of which have been as Section Director of Chaplains.

There is much to do for our Orthodox and non-Orthodox young people. It would be wonderful to see more of our clergy involved in local Scouting activities, either on the Unit, District or Council level. So, if a priest is invited to give an invocation or benediction at an Eagle Scout Court of Honor, he should wear his cassock and cross and know the occasion probably marks the first time anyone in the Troop has ever met an Orthodox priest!

I always have fun! I sometimes get dirty, tired and smoky, but I always laugh, and sing, and feel renewed. I believe that my many hours of service have made at least a small difference in the life of a Scout. And just by “being there,” thousands and thousands of Scouts have become aware of our Holy Orthodox Church.