Orthodox spiritual center to be built in Berlin 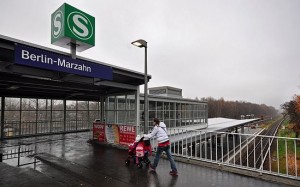 An Orthodox center with a stone church, Sunday school, library, hostel for pilgrims and kindergarten is to be built in the Marzahn district of Berlin, said Abbot Daniel (Irbits), the Superior of St George’s Monastery in Gotschendorf and secretary to the Archbishop of Berlin and Germany, in an interview with RIA Novosti on Wednesday.

According to him there are currently six parishes of the Russian Orthodox Church in Berlin, including “one German-language parish opened at the request of native Germans converted to the Orthodox faith”. According to the media about 40,000 representatives of the Russian-speaking population live in the Marzahn district of Berlin.

A piece of land which is 5,572 square meters in size, situated on Cosmonauts Avenue, was recently acquired by the Russian Church.

“The need to build an Orthodox church in the eastern district of Berlin–Marzahn–became apparent long ago. This is because the majority of our compatriots live precisely in this district and they need an Orthodox church. Letters were constantly received by the diocese of Berlin addressed to the ruling Bishop, Archbishop Theophan of Berlin and Germany, from the district’s residents asking for an Orthodox community to be founded there. And now, glory be to God, such an opportunity has come,” said Abbot Daniel.

According to him the Orthodox community of Marzahn at present has to rent premises, but at the same time preparatory work to build a temporary wooden church has begun. Its total area will be 225 square meters and 17 meters in height. The wooden church is expected to accommodate up to 250 people (until the stone church has been completed).

“The community wishes to finish building the wooden church by 28 August this year,” said Abbot Daniel. The Orthodox Church celebrates the feast of the Dormition of the Mother of God on that day.

At the same time he specified that the wooden church will be built using donations. However, he did not give the donors’ names, explaining that “those who contributed as they could to building the wooden church in Marzahn wished to remain anonymous”.

The agency’s spokesman had difficulty in replying when he was asked how many people there are in the Orthodox community in Berlin today. “On great feasts it happens that even our Cathedral (the Cathedral of the Resurrection) is not big enough to accommodate all the worshippers,” he noted.

Speaking about the appearance of the Orthodox center in Berlin, Abbot Daniel said that “First of all, an Orthodox church will be here to accommodate a living community”. “With premises for a Sunday school, an icon-painting workshop, an Orthodox library, a hostel for pilgrims, a dining-room for the needy and, of course, an Orthodox kindergarten which is also much needed in the center of the German capital, will be located around the church. The main thing is that the city authorities will meet us halfway,” said the agency’s spokesman.

According to him, as soon as a kindergarten is open at the Orthodox center, Church representatives will be ready to sit at the negotiating table with the city deputies to discuss obtaining the various authorizations. “This is just a question of time,” he added. When the stone church will be built is not yet known. According to Fr. Daniel, everything depends on possible financial helpfrom donors. “And first of all, before starting this work, we must receive a blessing from his Holiness Patriarch Kirill and submit the general architectural plans to his discretion and approval,” said the Abbot.

He specified that they hope to draw up three possible plans for the future church which then will be shown to the Church authorities. The Moscow architect Alexander Novikov is running the project to build the stone church and the Orthodox center.

According to information from the official website of the Diocese of Berlin and Germany of the Russian Orthodox Church, at the moment there are about 1 million Orthodox believers in Germany, among them Russians, Serbs, Greeks, Bulgarians and Romanians. In the last 15 years over 300,000 people have arrived in the country from Russia and countries of the former Soviet Union, and many of them are Orthodox Christians. There are currently over 60 parishes in the diocese of Berlin and Germany and over 50 priests and deacons serve in them. There are parishes of the Russian Church in all German cities.