When I began attending an Orthodox church, one of the first things to catch my attention was the lack of pews. The facilities were still under construction, so I thought they simply hadn't been purchased yet. After a few weeks, I asked the priest when our seats would arrive.
Priest Barnabas Powell | 19 October 2010

When I began attending an Orthodox church, one of the first things to catch my attention was the lack of pews. The facilities were still under construction, so I thought they simply hadn’t been purchased yet. After a few weeks, I asked the priest when our seats would arrive.

“Never,” he replied. I chuckled, thinking he was pulling my leg, but the humor was snuffed out by his deadpan expression.

Little did I know, I’d stumbled upon one of the peculiar features of Orthodox worship. Along with facing east, there is an aversion to sitting unless physically necessary.

Since there weren’t any pews in the Jerusalem Temple or early synagogues, it was only natural for the first Christians to worship on their feet. Standing for God wasn’t merely a matter of respect, but of expectation.

It fit the idea that in God’s coming kingdom, only one person would be seated – Christ on a throne of judgment.

Anticipation of Christ’s return was so fervent that worshippers wanted to be on their feet to meet him. This, coupled with his statement in Matthew that his coming would be like lightning from the east, also made east the orientation of worship.

Early churches were built with their altars toward the east. Not only did the people face this direction, so did the priest. The continuation of this practice in Orthodoxy can surprise those accustomed to having the minister face them throughout a service. A visitor once accused me of being rude.

The point isn’t that the priest turns his back to the people, but that he faces the same direction they face.

The Nicene Creed confesses, “I look for the resurrection of the dead, and the life of the world to come.” 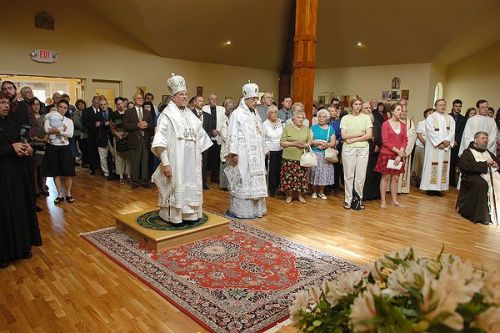 Orthodox may be presumed to take this literally, as priest and parishioners look to the direction of their anticipation’s fulfillment.

Protestant Reformers were the first to make a permanent 180, as they transferred the focal point of worship from the Eucharist to an extended sermon. Rome resisted pressure to follow suit until Vatican II, when Catholic clergy were also instructed to do an about face.

The Reformers were also the first to introduce pews. Posterior parking spaces were intended not only to make the congregation more comfortable, but to keep them still.

This move altered the entire ethos of worship, which lost much of its physical component and became more a mental exercise.

Worshippers could now be unself-consciously referred to as the “audience.” Their role as active concelebrants was diminished, which eventually led them to seek compensation in more entertaining and energetic services.

Aside from my few experiences with the resulting “charismatic” worship, with its pulse-throbbing excitement, my teen-age odyssey of church exploration usually meant grabbing a seat and inertly observing the program.

Standing, universal until five centuries ago, struck me as exotic. I had to learn a whole new posture in order to save my back (bend those knees), not to mention investing in some new shoes.

After a few months, standing seemed so normal that when I found myself visiting churches with pews, I felt a little claustrophobic.

Ironically, the most visible, surviving parallel to the posture of Orthodox worship isn’t found in Christendom, but in Islam. You won’t find pews in mosques. They’d only get in the way.

The first time I attended a solemn, Orthodox Lenten service, complete with prostrations to the floor (while keeping a strict fast), I was intrigued by these similarities.

They shouldn’t seem so surprising, however, considering that Muhammad and his followers adopted and adapted many beliefs and practices of their Eastern Christian neighbors-turned-conquered-subjects.

I don’t expect my Catholic or Protestant brethren to remove their pews or reorient their worship spaces, but I hope they’ll understand why we stand facing east.

It’s just what we’ve always done. And for Orthodox, that’s usually sufficient reason to keep doing it that way.