Our “Rule Of Faith”

Source: The site of the Greek Orthodox Metropolis Cathedral of Denver

One of the more persistent questions posed to the Orthodox these days concerns our practice of what has become commonly referred to as “closed communion.”  Generally, these questions take one of the following forms; “Why can’t my non-Orthodox friends or relatives receive holy communion when they visit my parish church?”  (or) ”Why can’t I receive holy communion when I visit my non-Orthodox friends or relatives at their church?”  and sometimes even  “What gives you the right to judge anyone’s fitness to receive holy communion?”  Inasmuch as our open and pluralistic society looks askance at any limitations placed on individual behaviors, particularly where religious behaviors are involved, it is needful that we here examine the Orthodox Church’s Eucharistic and Ecclesial theology to better understand why our Rule of Faith is important and deserves to be upheld. 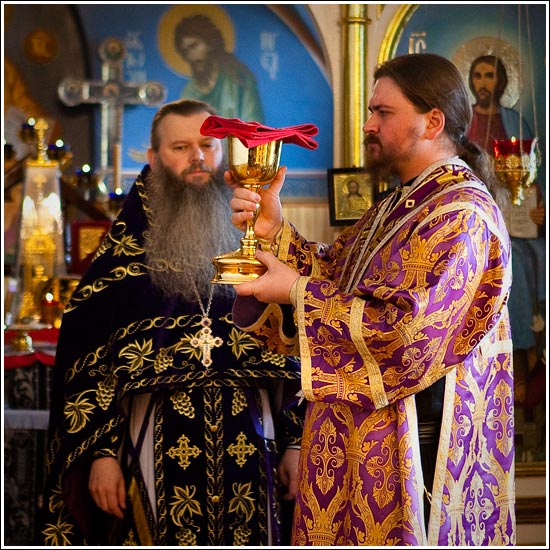 The religious experience of America is one of easy commerce between the multiplicity of “denominations,” “confessions,” “jurisdictions,” “faiths,” etc.  It is commonly accepted that ecumenical activities across the religious spectrum are the hallmark of an “open” and “friendly” church or parish.  And we Orthodox certainly involve ourselves in ecumenical activities where appropriate.  For instance, our 9/11 observances at the Cathedral this year were widely advertised and sought to include as many of our neighbors as possible.  Happily, many of them chose to attend our Memorial service in the evening and the coffee reception which followed.  But there is a fundamental and irreducible difference between an evening prayer service of a non-sacramental character on the one hand and the Sacraments (or Holy Mysteries) of the Orthodox Church on the other.

It is often stated by those who take umbrage with the Orthodox practice of “closed communion” that partaking of the Body and Blood of Christ is an affirmation of the communicant’s personal piety, that it is a “private” act expressive of one’s relationship with God and, as such, admits to no limitation or even discernment on the part of any church or priest.  But as popular and as widely accepted as this notion of a “personal communion” has become it is, nonetheless, plainly wrong from the point of view of Orthodox ecclesiology.  In fact, the receiving of the Holy Mysteries of Christ have never been understood as a “private” act in the mind of the Church.  That it is seen as such today only confirms how seriously eroded our own ideas of communion, unity, and the Church has become.

To accept on its face the rightness of a person’s decision to receive holy communion whenever and wherever one chooses is to first accept two underlying suppositions, the first of which concerns the nature of the Church.  To many, the term “Church” refers to an amorphous universal collective of individuals scattered throughout the world and inclusive of any and all “believers” regardless of whatever creedal or doctrinal differences may exist between them.  This model is commonly referred to as the “mystical” body but for a completely different reason than that behind the Orthodox use of that term.  For whereas we understand the phrase “the mystical Body of Christ” to refer to the “One, Holy, Catholic, and Apostolic Church” as expressed in the Nicene Creed which is nourished and sustained by the Holy Mysteries or Sacraments (hence the term “mystical”), a very concrete reality easily identified, the popular meaning of “mystical” refers instead to a gathering too illusive to strictly define.  This commonly held notion of the Church is one that flies in the face of Orthodox ecclesiology which sees the catholicity of the Church fully expressed in each local parish.  The Church in its most basic unit exists and is fully represented around each canonically consecrated altar.

This model is affirmed in a variety of ways in the praxis of the Orthodox.  It is understood that a catechumen when baptized into the Church becomes part of a particular community and not, as many have come to believe, simply a “free-lance” believer hopping from one parish to the next.  Those who acquire the habit of doing so are viewed, to be perfectly honest, with no small amount of suspicion.  Further, it is customary that an Orthodox person, when visiting another parish, should make an attempt to introduce him or herself to the parish priest prior to approaching the chalice on Sunday liturgy.  In cases where a person may be staying for an extended visit, a letter of good standing is routinely provided to the priest of the parish being visited.  These customs exist to bolster the discipline of the Eucharistic chalice and to limit the ability of flighty schismatics from parish hopping.  To receive the Body and Blood of the Lord is always a privilege and never a “right.”  It is Christ who seized the initiative in securing our salvation and it is He who is “the One who offers and is shared out” and who “when we were yet without strength, in due time died for the ungodly.” (Rom. 5:6)  According to our rule of faith, only those Orthodox who have prepared themselves to receive the Holy Gifts by keeping the fasts of Wednesday and Friday, (or other applicable fasts depending upon the liturgical season) who have reconciled themselves to anyone they may have wronged throughout the course of the week, and who have recently confessed are invited to partake.  These admonitions exist not to exclude communion but to reinforce the connection between our daily lives in Christ and the sacramental grace we receive in the Church to live them to His glory.  Once this connection is severed, perhaps by coming to incorrectly view our access to the Holy Mysteries as a “right,” then our partaking descends into the level of mere superstition and ceases to be transformative.

To those who would suggest that an “open communion” model is more appropriate to our now “enlightened,” ecumenical and non-judgmental times, I must point out the conjugal nature of the Eucharist as viewed through the lens of Church history.  When we sing today the communion hymn “Receive me today, O Son of God..” we hear the curious phrase “for I will not reveal thy mysteries to thine enemies, nor will I give thee a kiss as did Judas.”  This phrase refers to the time when disclosure of the mysteries of the Church to the uninitiated was an unthinkable breach of decorum.  The concourse between the Bridegroom and His Bride, the Church, was deemed to intimate an event to casually open to onlookers.  And just as a man would never in his right mind invite guests into his bedroom, early Church believers would never have dared to grant the uninitiated access to the Chalice.  Catechumens were themselves not instructed as to the details of the Holy Mysteries until near the end of their two or three-year catechumenate and were dismissed at the end of the Synaxis of the Word which concluded after the Epistle and Gospel readings with the blessings of the celebrant.  In like manner, penitents were also dismissed in some cases after the Gospel reading.

This bit of history is not offered to suggest a return to this model.  We welcome visitors into our services with open arms and are eager to share the Orthodox faith with the many that come to us week after week.  And we extend our love and fellowship to them in the form of the antidoron (the blessed bread) given to all at the conclusion of the Divine Liturgy. But is must be understood that the unity expressed in the Eucharistic chalice is the consummation of a relationship that begins with a catechuminate and continues on through Baptism and Chrismation into the Orthodox Church.  It is expressive of a living relationship with the Lord Jesus Christ who enters into union with those whose lives are lived in the context of the Church, who are “ecclesial beings.” It is an intimacy expressed between committed partners who have already “taken their vows” in a sense.  To strive for this intimacy outside the bonds of that relationship is, to be blunt, not unlike sex before marriage from our point of view.