Source: RT
Vyacheslav Kozlov | 02 March 2016
Approval of the public actions and statements of the Russian Orthodox Church has increased to record levels in Russia, according to a new survey. 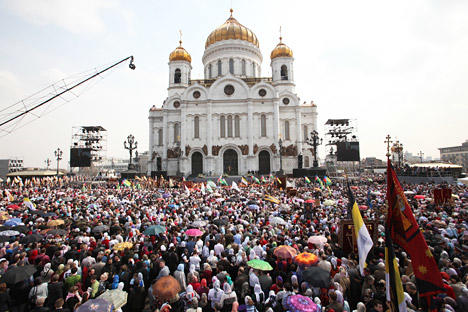 The results mark the highest level of support for the role of the Russian Orthodox Church in the entire history of sociological surveys in Russia since 1991.

For comparison, 15 months ago, in August 2014, only 42 percent of Russians approved of the role of the Russian Orthodox Church and religious organizations in state politics.

Furthermore, growing numbers of Russians want to see the church increase its influence on the maintenance of public morality, with 47 percent of respondents in favor of this idea in February 2016, up from 44 percent in March 2013.

However, 28 percent of respondents said the church should not have an influence on governmental decisions.

The highest demand for influence of the church on public morality and ethics occurred among Russians after the collapse of the USSR, and in July 2012, during the trial of the punk band Pussy Riot, who caused a nationwide scandal by performing inside a Moscow cathedral. In both periods, 50 percent of respondents wanted the church to strengthen its moral preaching.

At the same time, the number of those who do not want the church to interfere in public life has increased from 11 percent in March 2013 to 15 percent in February 2016, the highest level of anti-clerical sentiment seen since January 2008.

“The authorities are constantly articulating the important role of Orthodoxy as one of the components of ‘special national identity,’ in contrast with Western values and patterns, and people willingly support this idea, especially during periods of worsening relations between Russia and the West,” said Levada Center sociologist Karina Pipiya.

However, when it comes to religiosity itself, that is, fasting and regular attendance of services, Russians do not derive satisfaction from the activities of the church in their daily lives, she said.

A full version of the article is available in Russian.