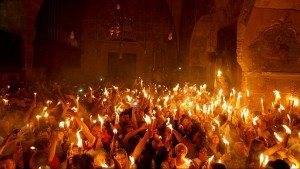 Thousands of Israeli police officers were deployed on the eve of the Orthodox Easter as throngs of Christians filled Jerusalem’s ancient Church of the Holy Sepulchre and surrounding streets for the ceremony.

“It is not only that Israel has isolated our occupied capital from the rest of our country – forcing our people to apply for special military permits to access their families and holy places for religious occasions – but even Palestinians from Jerusalem were beaten when trying to reach the Church of the Holy Sepulchre,” Hanna Amireh, a member of the PLO Executive Committee and Head of the Presidential Committee on Church Affairs, told AFP news agency.

Israeli police said tens of thousands of faithful gathered in the streets around the site where Christians believe Jesus was crucified, buried and resurrected, causing huge delays at dozens of checkpoints.

“This is part of Israel’s plan to turn Jerusalem into an exclusive Jewish city.

“Palestinian Christians and Muslims face countless difficulties in order to reach their holy sites and conduct their celebrations, while Jews from anywhere are allowed to freely pray at their holy places.

“It is time for the international community to take real action,” he added.

“What was witnessed in Jerusalem was an attempt to cancel a tradition of 700 years.

“The Israeli government is doing everything possible in order to achieve its goal of changing Jerusalem’s landscape, by building more settlements, demolishing more Palestinian homes, revoking more IDs and by attempting to prevent the normal celebration of Christian and Muslim religious events…”

The PLO said Israeli police stopped a visit organized by Palestinian Christian groups with foreign diplomats and Adnan Ghaleb al-Husayni, the governor for Quds (Jerusalem) Governorate, as they tried to enter the Old City of Jerusalem.

“Even praying has become an act of resistance for Palestinians,” said Amireh.