“If you have no relatives in the West Bank, you can’t afford to visit the Church of the Nativity [in Bethlehem] with your family members. This is because of the economic hardships here in Gaza,” said William al-Turk, as he, his wife Nancy and their four daughters attended Christmas services this week at Saint Porphyrius, the only Orthodox church in Gaza City.

According to the Eastern Christian calendar, the church marks Christmas on 7 January.

Israel granted several hundred Christian Palestinians aged under 16 or over 35 short-term permits to travel to the occupied West Bank to participate in Christmas celebrations in recent weeks.

Since 2007, Israel has imposed a tight blockade on the Gaza Strip, home to 1.7 million Palestinians. 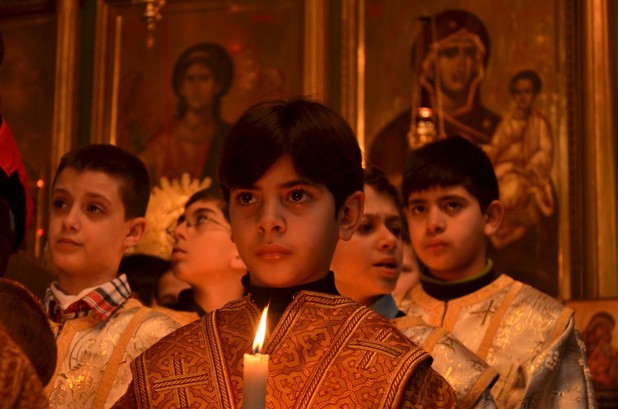 Children participate in Christmas services at the Church of Saint Porphyrius in Gaza City.
(Shadi Alqarra / The Electronic Intifada)

“Different from the past”

Still, even though they stayed at home, the al-Turk family were dressed in new clothes and surrounded by other worshippers in the ancient church, whose first stones were laid in the fifth century of the common era.

As churchgoers greeted each other, a young man offered them cups of Turkish coffee, honoring the Arab tradition of hospitality on major occasions.

“I don’t think I’m going to celebrate outdoors, only here at the church. I might go with my friends to a nearby restaurant,” said Rosa, one of the al-Turks’ daughters.

“We celebrate here for about three days,” she said.

Nancy, looking hesitant, spoke up when pressed about the less than celebratory mood: “Christmas in recent years has looked different from the past. In the past, we faced no economic hardships and used to enjoy Christmas to the fullest.”

“During Christmas, we make special foods, including a roast turkey dinner, cakes and sweets stuffed with dates. In previous years we would have a little wine, but for the time being we can hardly find any.”

William added that marking the Christmas celebration has in recent years been limited to little more than calling on family members, though he pointed to decorations and to a Santa giving small gifts to the children.

He noted that in keeping with common tradition, he, his brothers and their families would gather at his parents’ house for a celebration.

Hani Tarazi, a local trader, attending the services with his family, told The Electronic Intifada his Christmas wish: “What I really hope for this year is that Palestinians achieve national unity on the basis of Palestinian national interests, away from any partisan interests or religious affiliations.

“Palestinians should start honoring Palestine, first and foremost. We are all Palestinians, irrespective of our various backgrounds.

“We hope that the Israeli blockade of Gaza is lifted completely and that people will have freedom of movement.”

Outside, Khader Saba, a teenager, stood with his friends near the church’s cemetery. They all wore new clothes and chatted merrily.

“Me and my friends take some of the gift money we got from our fathers or brothers and head either for the Christian Youth Association or Unknown Soldier Square in Gaza City to enjoy some time out,” Saba told The Electronic Intifada.

In the cemetery, families visited the graves of loved ones whose absence was particularly felt at holiday time.

Jawdat Michael, a university student and a Christian youth leader, hoped that the coming year would bring better things for all youth in Gaza, including the territory’s Christian community.

In the Gaza Strip, the Christian community constitutes a very small minority, comprised of a few hundred families. Most of them belong to the Orthodox church, but there are also Catholic and Protestant congregations.

“When I was a child, I remember that I took part in scout parades right in the heart of Gaza City, not only in the church. I also remember that the Christmas tree used to be lit at the public garden at Unknown Soldier Square, where all segments of society used to enjoy Christmas Eve,” Michael said.

Rami Almeghari is a journalist and university lecturer based in the Gaza Strip.