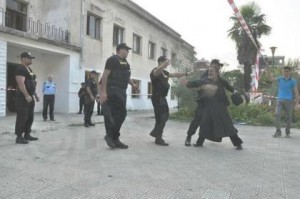 There was plenty of tension and commotion when a Greek Orthodox Church in Permet, Albania came under attack and as police kept away priests and the faithful from trying to defend it. Albania disregarded a complaint from Greece’s government.

The Panepirotic Federation of America (POA) said it strongly condemns what it called a brutal attack on a Greek Orthodox church in the city of Premet in southern Albania on Aug. 16 by what it said were hired government thugs who smashed icons and crosses and beat up worshippers trying to defend the only Christian house of worship in the city. “The attack on the Church of the Virgin Mary, on the morning after her feast day, revived ugly memories of past attempts by government agencies of outgoing Prime Minister Sali Berisha to harass, intimidate and brutalize ethnic Greek Orthodox communities in Albania,” said POA President Demetrios Koutoulas.