Patriarch calls for prayers for success of peace conference on Syria 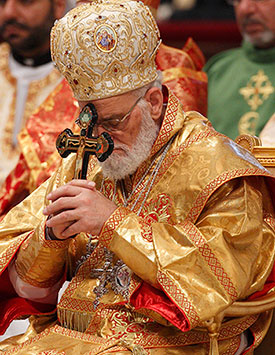 BEIRUT — The president of the Assembly of Catholic Hierarchs in Syria appealed for people to pray for the success of the Syrian peace conference set to start in Geneva Jan. 22.

Syrian-born Melkite Catholic Patriarch Gregoire III Laham, in his role as assembly president, issued the call in mid-January as world leaders prepared to gather for a second round of talks focused on Syria’s nearly three-year civil war.

The appeal, released to Aid to the Church in Need, was addressed to “my colleagues and beloved bishops, all our children, priests, monks, nuns, faithful, confraternities, youth movements, families, young people and children.”

In a document issued with the call, he invited Western nations to join in praying for peace.

“We implore (God) to hear our prayers, respond to our cries of distress and the suffering of the victims, and grant us the gift of peace,” he said.

The often-delayed peace conference originally was to begin in May in Switzerland but was delayed. As many 30 countries are expected to send representatives. Representatives of the regime of Syrian President Bashar Assad and opposition forces were expected to attend.

Patriarch Gregoire urged prayers for “genuine reconciliation among all Syrians.” He also urged people to pray particularly for a united stance from the United States, the Russian Federation, European Union, China and Iran so that Arab countries also might unite behind the push for peace.

“This dual international and Arab unity is the warranty for the success of (the conference) and is the real way to halt the influx of weapons to the armed foreign groups in Syria and to the whole region,” Patriarch Gregoire said. “Seeking for peace rules out sending weapons, for peace has no need of weapons.”

The war has claimed more than 100,000 lives, according to the United Nations. In addition, an estimated 6.8 million Syrians — the majority internally displaced — require humanitarian assistance, reported the U.N. High Commissioner for Refugees.