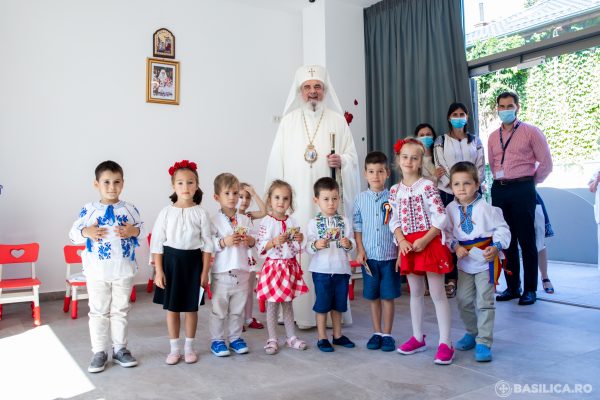 “Kindergarten and family form the child together when his being is very flexible,” Patriarch Daniel said September 15.

The project of the kindergarten, His Beatitude said, “started from the desire to help the Christian family today in the great art of education, of spiritual modelling of the child’s soul”.

He stressed the need to educate children, including in spiritually, arguing that the Church treats them as people fully prepared for spiritual growth from birth.

“Saint John Chrysostom says that the one who only gave birth to a child from a physical point of view is not a full parent. The complete parent becomes the one who shows responsible love and care for the education, for the formation of the child,” said Patriarch Daniel.

“So, the spiritual growth through education of children is just as important as their physical growth.”

“In the Orthodox Church, when a child is baptized, on the same day he is confirmed, anointed with the seal of the gift of the Holy Spirit. The chrismation is not postponed for later. And on the same day, he is offered the Sacrament of Holy Communion. ”

Through this, explained the Patriarch of Romania, “the Orthodox Church considered that along with the child’s physical growth (…) it is necessary to develop the spiritual growth.”

“Therefore, the baptized child is considered a person – not a person in the making, an existing person, who has a name and a face and was placed, through Baptism in the name of the Father and of the Son and of the Holy Spirit, in a relationship of eternal love with the Divine Persons of the Holy Trinity,” added the Romanian Patriarch.

Faith and education, lights of life

Patriarch Daniel called faith and education “lights of life to be passed down from generation to generation.”

The inauguration of the kindergarten in the Commemorative Year of the Romanian Orthodox Philanthropists reminds us that they built two important institutions: churches and schools, which the patriarch called “establishments for the enlightenment of the soul.”

“In the tradition of the Romanian people, School and Church have worked together to emancipate generations, to enlighten the people. In general, schools and churches were close. Often the priest was also a teacher or the priest’s wife was a teacher. To this day we have this beautiful tradition of collaboration between school and church,” Patriarch Daniel underscored.

He went on to explain why kindergarten is probably the most important “school”: because it helps to complete the seven years of childhood from home, as the people say.

The seven years from home are formative

“Scientific studies in the field of education have shown that the first six or seven years are decisive for character formation, emotional and educational formation of children. So the kindergarten and the family form the child together when his being is very flexible.”

“The present and the future of our country depend on the way the family and the kindergarten, and then the school work together for the formation of the young generation,” the Patriarch noted.

At the end of his speech, His Beatitude Patriarch Daniel wished “good health and help to all those who serve education, those who are involved, contribute to, and are engaged in this holy and great work.”

“Those who pass on knowledge to the young generation are great missionaries, they have a holy work, a work of transmitting values,” said Patriarch Daniel.

Patriarch Daniel presented the director with an icon representing the Annunciation of the Theotokos, the patronal feast of the kindergarten.

The “Annunciation” kindergarten of the Romanian Patriarchate is not confessional but is based on Christian values. The institution aims to support families in shaping the character of children, in preparing them for integration into the community and for facing the challenges of life.