Source: Basilica.ro
‘Man as a rational and a relational being, having a spiritual connection with God and peers, grows spiritually through gratitude,’ stressed His Beatitude Patriarch Daniel during his sermon on Sunday.
Aurelian Iftimiu | 23 January 2020 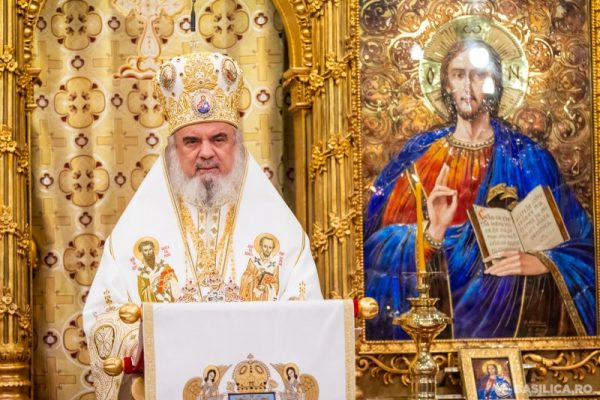 On the 29th Sunday after Pentecost, the Patriarch of Romania presided over the Divine Liturgy at the Patriarchal Cathedral of Sts Constantine and Helen in Bucharest, having as concelebrant his patriarchal auxiliary bishop Varlaam of Ploiesti.

Speaking about the healing of the ten men with leprosy remembered in the Gospel of Luke 17:12-19, Patriarch Daniel explained that the Saviour Jesus Christ ‘respected the law of Moses from humility.’

That law provided that a healed leper should show himself to the priests in order to be reintegrated into the community, His Beatitude noted.

“Christ wilfully does not heal them immediately with a word, but directs them to the priests to give them the freedom to be or not to be grateful.”

By this, His Beatitude Patriarch Daniel said, “Christ respects human freedom as regards being grateful or not.”

Every healing done by Christ happened “out of humble and merciful love because Jesus did not want the praise of people, He did not want to affirm Himself, to stand out,” His Beatitude said.

The Romanian Patriarch went on to explain the question posed by Christ regarding ‘the other nine’ who did not come back to thank Him for being healed.

“It is obvious that Jesus wants to show us by this question that ignorance is not natural, it is not healthy, that the ungrateful man is not a natural man.”

His Beatitude emphasized that he who does not thank for the benefactions received from God and people is not a worthy man, but a degraded one.

“That is why He demands gratitude, because only through gratitude can someone grow spiritually.”

Addressing the consequences of ingratitude, Patriarch Daniel said that ‘when a man to whom good has been done is not thankful, he becomes dehumanized, diminished, fallen, and descends spiritually, but when he is thankful, then he is in the natural dignity of an eucharistic being, that is, thankful, grateful.’

This is why the Patriarch of Romania mentioned that the highest work of the Church is the Holy Eucharist or the Holy Thanksgiving.

“At the Divine Liturgy, through the Eucharistic prayers, we thank God for all the benefactions received, shown or not shown, known and unknown,” explained His Beatitude.

“Thanksgiving or the Eucharist is the highest activity of the human soul.”

Ending his sermon, Patriarch Daniel noted that the Gospel passage from Luke helps us learn the great virtue of gratefulness from the Samaritan man who returned to Christ to thank Him.

“He was able to go back and thank Christ because he was the humblest. A proud, haughty man thanks formally, not from the heart,” underscored His Beatitude.

“We have the duty,” the Patriarch of the Romanian Orthodox Church urged, “to thank first our parents who gave birth to us and raised us, our spiritual fathers who helped us free ourselves from many sins, the teachers who helped us train intellectually and those who have helped us to rise from the bed of suffering in difficult situations.”