Source: Basilica.ro
Given the Solemn Year of the pastoral care of parents and children in the Romanian Patriarchate, His Beatitude Patriarch Daniel stressed that the Three Holy Hierarchs and Ecumenical Teachers received a perfect Christian education during childhood and offered their mothers as models for today’s mothers.
Aurelian Iftimiu | 12 February 2020 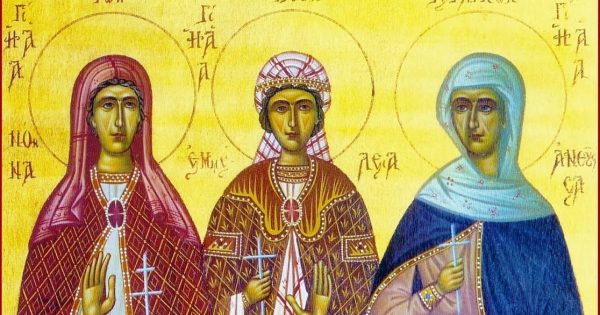 During his sermon delivered January 30 at St Gregory the Enlightener Chapel of the patriarchal residence, the Patriarch of Romania praised Saints Nonna, Emmelia and Anthousa, the mothers of the Three Holy Hierarchs.

‘Fourth-century Christian mothers and parents, in general, were aware of the responsibility to raise their children in the faith, to make them lovers of Christ and the Church, and to urge them to be merciful,’ Patriarch Daniel said.

The Patriarch noted that the education of merciful parents who taught their children to be merciful can be observed in the life of the Three Holy Hierarchs.

‘All these Three Holy Fathers, Basil the Great, Gregory the Theologian, and John Chrysostom, defended the poor, widows, people in distress, and the sick. They defended human dignity when it was humiliated by passions, greed, and injustice throughout history.’

”The poor are the door-keepers of the kingdom.
– Saint Gregory the Theologian

His Beatitude underscored that ‘these Holy Fathers are teachers not only for monks, not only for theologians but for all persons, that is why they are called Great Ecumenical Teachers. In particular, their families are a model for today’s families.’

The Romanian Patriarch said that Saint Emmelia gave birth to ten children, five of whom became saints: Basil the Great, Gregory of Nyssa, Peter of Sebaste, Macrina the Younger and Theosebia the Deaconess.

‘Saint Emmelia considered giving birth and bringing up children, and above all their education in the Christian faith is the noblest work and the most beautiful sacrifice that a mother can bring.’

‘A mother who gave birth to three children and all three became saints,’ Patriarch Daniel said listing Saints Gorgonia, Caesarius, and Gregory the Theologian. Her husband was Saint Gregory the bishop of Nazianzus.

‘She was the one who influenced St Gregory the Theologian’s Christian lifestyle and piety.’

Referring to Saint Anthousa, Patriarch Daniel said that she is the example of a sacrificial woman, because she raised her only child alone, because her husband who was an officer in the Roman army, died shortly after John’s birth.

‘She did not want to remarry, saying that all her time will be devoted to the upbringing and education of her son, that is, of the one who would become the Archbishop of Constantinople, Saint John Chrysostom.’

‘This is how much she thought the education of her child valued.’

Saint Basil the Great reorganized the monastic life in a different way from the Egyptians, who had monasteries with thousands of monks, drawing inspiration from the Christian family, the Patriarch explained.

“He considered that the monastery should not have many inhabitants, so that they should know each other well, as in a family.”

“He took the model of his family in which he was born and applied it to monastic life. Therefore, Basilican monasticism that was inherited especially by us, Romanians, is a balanced monastic lifestyle that unites prayer with work, according to the principle ‘Ora et labora’, that is ‘Pray and work’.”

Saints do not compete

In his sermon, His Beatitude Patriarch Daniel recalled that the common feast of the Three Holy Hierarchs was established at their own initiative, through a miracle, to stop the division between some Christians who disputed the greatest honour for Sts Basil, Gregory, and John.

The Three Holy Hierarchs appeared to a metropolitan, John of Euchaita, saying that they do not quarrel in heaven, that there is no one on the first place and another on the second place, but all are one, and each of them has proclaimed the consubstantial and undivided Trinity and worked for people’s salvation.

This “teaches us that the saints do not compete with each other, but complement each other,” the Patriarch said.

His Beatitude narrated the life and miraculous works of the three great Hierarchs, highlighting their common points such as having different sufferings, weak bodies, but strong souls, using the culture of the time selectively and critically and always associated the text of Scripture with the social context.