Patriarch Daniel: St Paisios of Neamt Has Founded a School of Spirituality for Whole Orthodoxy 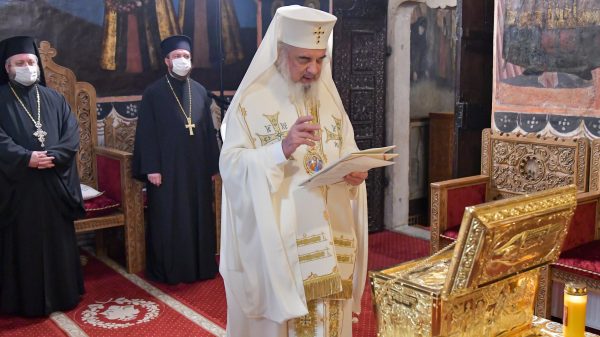 Patriarch Daniel on Thursday blessed a processional reliquary containing a fragment of the relics of St Paisios of Neamț, saying that the Saint founded a school of spirituality useful for the whole Orthodoxy.

St. Paisios of Neamț (Velichkovsky) organized and guided monastic communities at Dragomirna, Secu and Neamț monasteries in Romania. He translated the Philokalia into Russian.

Through his hesychastic life and the generations of disciples he created, as well as through the translation of the works of the Holy Fathers, he was a defender of Orthodoxy, Patriarch Daniel underlined.

“There were times when Orthodoxy had to be defended and we see that the defence of Orthodoxy was done first by the saints who prayed, the ascetic saints and the holy scholars, who urged the people to keep the faith, but also to rediscover the richness of the Holy Fathers of the Orthodox Church,” said the Patriarch.

His disciples included Metropolitan Veniamin Costachi of Moldova and Metropolitan Gregory the Teacher of Wallachia. His Beatitude also mentioned Saint Callinicus of Cernica and St. George, the abbot of Cernica and Căldărușani Monasteries among St Paisios’ spiritual sons.

Useful to the whole Orthodoxy

Some of the approximately 1,000 disciples of St Paisios of Neamț went, after the saint’s repose in the Lord, to Russia, where they founded hesychastic monasteries.

“The most famous of all was Optina Monastery and these fathers, Hesychasts, Paisiosites of Neamt Monastery, developed in the nineteenth century a very rich Orthodox spirituality, which then inspired some Christian writers, such as Dostoevsky,” Patriarch Daniel noted.

The story of the relics of St. Paisios of Neamț The saint’s tomb was known, but his relics were only recently found.

On May 24, 1986, an unknown saint was discovered who was buried under a path at Neamț Monastery. Many said that this was in fact Saint Paisios Velichkovsky.

To end the controversy, on September 23, 2013, a commission organized by the Metropolis of Moldavia began research at the tomb of St. Paisios in the Church of the Ascension at Neamț Monastery.

The relics of St. Paisios of Neamț were found in his tomb. After a research that established that they belong to the saint, on May 20, 2015, a large reliquary was made for them.

The reliquary blessed on Thursday at the Patriarchal Residence in Bucharest is a smaller one, for processions, and contains only a fragment of the relics of Saint Paisios of Neamț.

An Orthodox priest rescued two people from a building engulfed in flames in Constanţa. Assisted by two off-duty…

The pandemic is a significant examination for us all, Transylvania Metropolitan says

“This pandemic is a significant examination for all of us, in which the fear of death and the…

Pătrăuţi Monastery reopened after being abolished by the Habsburg Monarchy more than two centuries ago. On the Sunday…

Most viewed articles
We Are Not Saint Mary of Egypt (But We Can Still Repent)206
Dining with Caesar141
Orthodox Priest Rescues Two People from Fire in Constanța125
What Does Asceticism Look Like?38
Archbishop of Australia Attends Commemorative Events for Battle of Crete in Melbourne35
Ukrainian Church Calls for De-Escalation of the Conflict in Donbass11
Most popular authors
Archpriest Geoffrey Korz206
Archpriest Lawrence Farley141
Aurelian Iftimiu122
Pravmir.com team45
Archpriest Michael Gillis39
Maria Trushanina1