Patriarch Daniel to pilgrims at Putna: Believers feel the maternal love of the Theotokos. She is an intercessor for the whole world 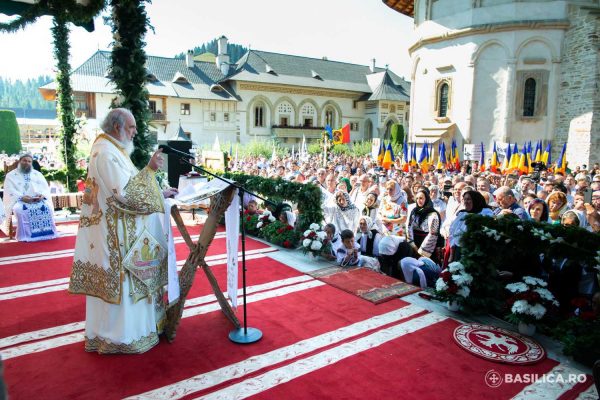 “The Mother of God is an intercessor for everyone, but she is especially praying for virgins and mothers, because she remained an Ever-Virgin, and also for mothers or families because she breastfed and raised her Son Jesus Christ,” His Beatitude Patriarch Daniel said on Sunday addressing the pilgrims at Putna Monastery.

The Patriarch of Romania celebrated the Divine Liturgy at the outdoor altar of Putna Monastery for the feast of the Dormition of the Theotokos (August 15/28).

“The Feast of the Dormition begins to spread first in Jerusalem, then in Constantinople starting with the 5th century AD. Nothing is said about the Dormition because nothing was written about it. But the tradition of our Church has recorded the fact that the Mother of God was translated to eternal life, that is, she died in Jerusalem in the house where she lived and was taken to be buried in the village of Gethsemane.”

“In the 8th century, St. John of Damascus and St. Germanus the Patriarch of Constantinople left us sermons of great beauty about the Dormition of the Theotokos, while St. Cosmas the Melodist left us hymnographic and liturgical writings.”

She gladly received the news of her dormition

“It is a great mystery because this translation to her Son, to the dead and risen Christ, is not called resurrection, ascension into Heaven, but a translation. It is an exact term,” Patriarch Daniel explained.

“The synaxarion notes that three days before she fell asleep, Christ said to the Archangel Gabriel: tell my mother that has come for her to come to Me.”

“Therefore, the Mother of God received the news not with sorrow, but with joy. Because she goes to heavenly life to be together with Her Son.”

The relationship between the Theotokos and Her Son

The Orthodox Church emphasizes the personal relationship of the Mother of God with Her Son Jesus Christ, His Beatitude explained.

“What He followed in the work of salvation the Mother of God also follows. Because the Saviour Jesus Christ willingly received the salvific death, and the Mother of God receives this translation from the earthly world to the heavenly life willingly and joyfully.”

“That is why, in the icon of the Dormition, the soul of the Mother of God clothed in white or sometimes in a luminous garment is held in the hands of the Saviour.”

The Mother of God becomes the icon of the Church that translates us from the transient world to the eternal heavenly life, the Patriarch of the Romanian Orthodox Church underscored.

“This explains why the feast of the Dormition was established by the Church in the last month of the church year.”

“The Mother of God prays for us at the hour of our death and on the day of judgment.”

“That is why she is a continuous intercessor.”

The maternal love of the Theotokos

“Before she fell asleep, the Mother of God prayed for the strength and peace of the world. Then, she distributed her garments to poor women and died praying and giving her soul into the hands of her Son Jesus Christ.”

“That is why the Orthodox believers feel the maternal love of the Mother of God.”

“From the miracle in Cana of Galilee, the Church learned that the Mother of God is an invincible, unrejected, undeclined intercessor. Therefore, in the services of our Church, no matter how short or long, we say at the end, Through the intercessions of the Theotokos and all the saints, Lord Jesus Christ, have mercy on us and saves us. Amen,” His Beatitude Patriarch Daniel concluded his speech.

His Beatitude Patriarch Daniel on Monday officiated a Te Deum service at the Patriarchal Cathedral in Bucharest, marking…