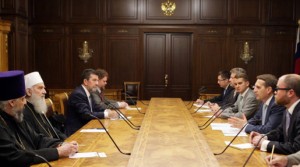 MOSCOW – Patriarch of the Serbian Orthodox Church (SPC) Irinej has voiced expectation in Moscow that Russia, as the major Slavic power, will help resolve the Kosovo issue in a fair way, reported Tanjug.

We pin our hopes on Russia that it will help settle the Kosovo issue, Patriarch Irinej said on Tuesday in talks with Sergei Naryshkin, speaker of the State Duma which is the lower chamber of the Russian parliament.

The Serbian Patriarch said that Serbia is going through a difficult period, pointing to the suffering of the Serb people in Kosovo-Metohija (KiM).

Everything is at risk in Kosovo, Patriarch Irinej said, voicing hope that Russia has a clear picture about real developments in Kosovo, the Russian news agency reported.

Patriarch Irinej is on his first official visit to Russia since assuming duties. With the delegation, he will tour Russian churches and monasteries, and Orthodox holy sites in Ukraine and Belarus during the two-week visit.

Together with other patriarchs of autocephalous Orthodox churches, he will take part in the celebrations of 1025th anniversary of Russia’s christening.

The Orthodox patriarchs will be received by presidents of Russia, Ukraine and Belarus.