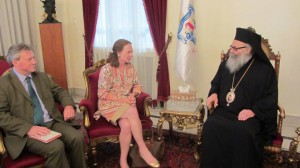 Damascus, (SANA) – Patriarch of Antioch and all East for Greek Orthodox John Yazigi stressed the importance of finding a political solution to the crisis in Syria.

Meeting Austrian Ambassador in Damascus Isabel Raucher charge d’ affairs of the European Union Michel Ryan in Syria and political advisor at the European Union Commission in Damascus Anis Nakror, the Patriarch pointed out to the importance of finding a political solution to the crisis in Syria and to consolidate the language of dialogue, in addition to renounce the language of violence.

He called for working to release the abducted bishops and all abducted.

During the meeting, discussions dealt with the general situation in Syria.