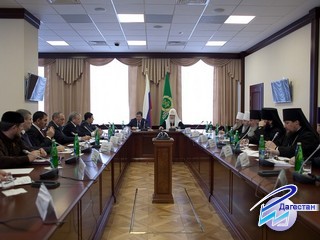 Makhachkala, December 13, 2012.  Today, the Patriarch of Moscow and All Russia, Kirill has held converse with muftis from all regions of the North Caucasian Federal District, in Kislovodsk. The Chairman of the North Caucasian Muslim Coordination Center Ismail Berdiev, the head of Muslim Religious Board of Dagestan Ahmad Khadzhi Abdullaev, the representatives of religious boards of Stavropol Territory, the Republic of North Ossetia-Alania and the republic of Ingushetia have participated in the meeting.

The issues of cooperation among the Russian Orthodox Church and the Muslim communities of the Caucasus such as the protection of traditional moral values, prevention of religious extremism, the development of religious education and youth policy development have been discussed. The primate of the Russian Orthodox Church shared his thoughts on the most pressing issues of inter-religious and inter-ethnic relations in the Northern Caucasus.

The chairman of the Muslim Religious Board of North Ossetia-Alania, H. Gatsalov expressed concern about the inequality existed among believers and non-believers in the Common School System.

Berdiev handed over a highest award of the North Caucasian Muslim Coordination Center to the Patriarch Kirill at the summit meeting.

In conclusion, the Patriarch of Moscow and All Russia and the chairman of Muslim Religious Board of Northern Caucasus signed the joint Declaration on international consent and cooperation.