The head of the Russian Orthodox Church, Patriarch Kirill of Moscow and All Russia, was on Sunday awarded with the Polish Orthodox Church’s Order of Mary Magdalene, 1st Class, the Polish Catholic News Agency (KAI) reported. 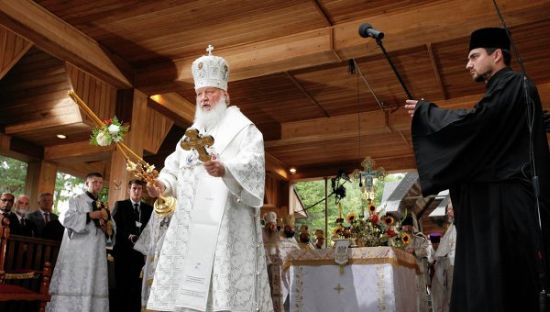 Patriarch Kirill of Moscow and All Russia holds a liturgy during the Transfiguration of Jesus festivity at the Holy Hill of Grabarka on Audust 19, 2012

On the last day of Patriarch Kirill’s visit to Poland, Metropolitan Sawa of Warsaw and All Poland, who leads the Polish Orthodox Church, wished him “many years” of service for the good of Orthodox Christianity in Russia and the world.

Patriarch Kirill said after the service that the visit to Poland was a very important spiritual experience for him.

The head of the Russian Church arrived in Poland on Thursday on Metropolitan Sawa’s invitation.

He has met with Polish Orthodox Christian clergy and the country’s top officials, and signed a joint Catholic-Orthodox reconciliation appeal to the Russian and Polish nations, urging them to overcome historical differences and forgive each other.

This was the first official visit by a Russian Orthodox Church leader to Poland, where most nationals are Roman Catholics.